Warning: Footage showing collision may be disturbing to some viewers
KABC
By Sid Garcia 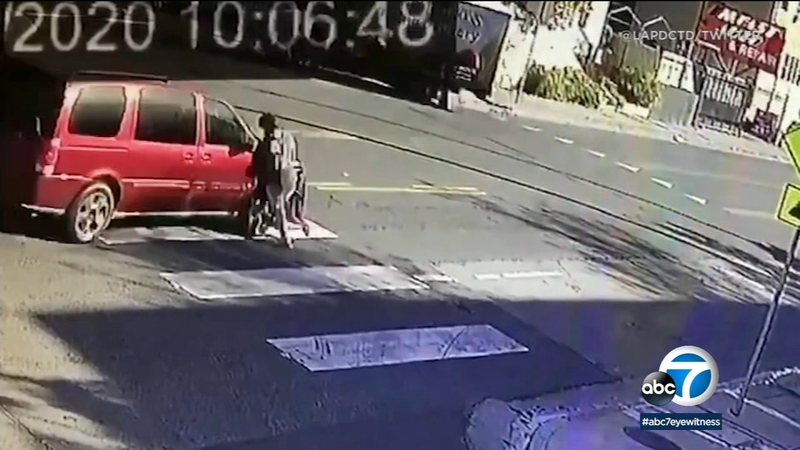 EAST HOLLYWOOD, LOS ANGELES -- Police are hoping a $25,000 reward can help find the driver of a minivan that fled the scene after plowing into a 50-year-old woman in a marked crosswalk in East Hollywood, sending her to the hospital.

Video of the incident shows the woman crossing in a marked crosswalk Tuesday morning. There is little traffic and appears to be no visual obstructions.

WARNING: The footage in the Eyewitness News video accompanying this story shows the collision and may be disturbing to some viewers.

A red minivan strikes her hard at the front passenger side corner, flinging her to the ground. The vehicle doesn't appear to slow down or stop.

Tatiana Leytman was left with a broken foot and fractured ribs. She is now at home recovering.

Her husband says she's lucky to be alive.

"It's unbelievable," said Vladimir Leytman. "She just passed the crosswalk. She has the light and she follows the rules. Somebody hit her and not stop - hit and run. It's disgusting. To hit a person and not stop - it's unbelievable."
Los Angeles Police Department Det. Moses Castillo says if the driver of the van had stopped and helped Leytman the incident would likely be treated as an accident. But the driver didn't stop and now he or she is facing felony hit and run charges.

He noted that particular intersection is a very busy, and dangerous one, for pedestrians. Still, drivers need to remember those on foot have the right of way.

"Pedestrians must be extra careful, vigilant when crossing the street," Castillo said. "And drivers need to pay attention. You gotta slow down. Look for pedestrians, look for bicyclists, look for a motorcyclist. These things can happen in an instant."

Vladimir is asking for the public's help finding the person responsible for hitting his wife and driving away.

The city is offering a $25,000 reward for information leading to the driver.

The red van has front passenger side damage. It is described as a 2005 to 2010 Chevrolet Uplander minivan.
In 2019, more than half of the nearly 250 traffic deaths in the city of Los Angeles involved pedestrians.