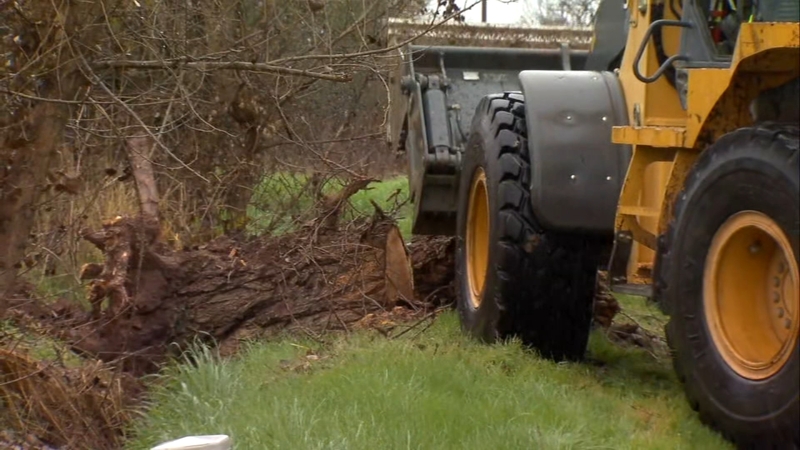 FRESNO, Calif. (KFSN) -- Storms are causing some problems on the roads and in neighborhoods.

A pretty decent-sized puddle formed on Armstrong north of Belmont Wednesday morning. It's not big enough to close the street, but this is just Day 1 for this storm.

Several cars splashed through wet roads in Fresno and some of them lost control, like a pickup truck that flipped as it tries to enter Highway 180 at Fulton.

"When he lost traction, he went off to the left and hit the dirt embankment which has a little bit of a slope to it and it appears the slope along with his speed just caused the vehicle to overturn," said Sgt. Ryan Murakoshi of the California Highway Patrol.

The truck landed upright, but it's roof caved in, most of its windows broke, and a little girl suffered minor injuries.

Fresno County crews cleared Dakota Avenue near Thompson where they found a crash and a tree on the road.

"When we got here, the tree was down," said Richard Cuevas, as he worked on the Fresno County roads crew. "We were on the back side of it. Truck was in the ditch."

They cleared everything up in short order, but downed trees have become fairly common over the last 10 days.

One fell in the Tower District, another in a county island in east central Fresno.

County road crews know this is just the start.

"With the storm coming, it's going to keep us busy," Cuevas said. "We're going to be up the hill, probably snow in the next couple days, so keeping our guys busy. Our guys are keeping the roads clean. Taxpayers' dollars at work."

"It's definitely a day where people need to slow down, allow a little bit more time, and just kind of expect the unexpected on the roads," Sgt. Murakoshi said.

Again, the storm is just getting started, so puddles like the one on Armstrong may turn into ponds, and slowing down just a little could save you from hydroplaning or flooding your car.
Report a correction or typo
Related topics:
weatherfresnowindweatherwind damagetree fall
Copyright © 2021 KFSN-TV. All Rights Reserved.
More Videos
From CNN Newsource affiliates
TOP STORIES