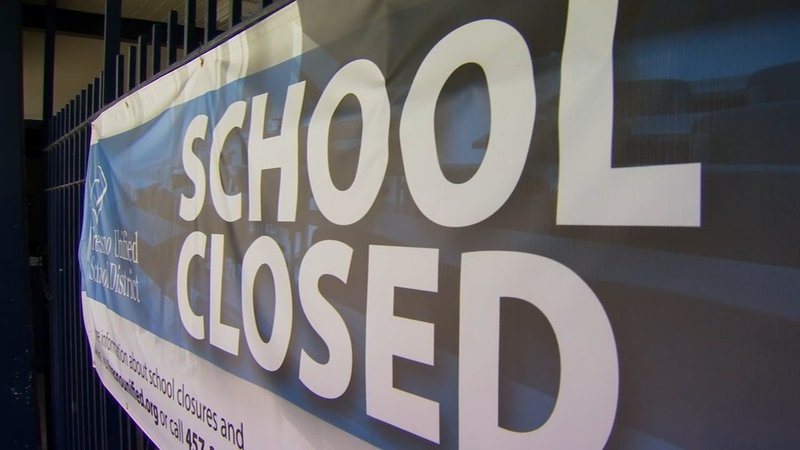 FRESNO, Calif. (KFSN) -- A Fresno city council member's plan to sue Fresno Unified and force them to open school was dead on arrival.

"I just don't see (this) as the means to accomplish that," said Fresno City Council President Luis Chavez.

Bredefeld accused Fresno Unified superintendent Bob Nelson of hypocrisy and said Nelson is bending to politics and the teacher's union, but his comparison missed the mark, according to Nelson, who has attacked back on social media since Bredefeld initially announced his plan earlier this week.

So how is that current two-party system working for you, Fresnans? Nothing like politicizing an issue as serious as a safe and responsible return to schools in order to rally a support base. The only thing this release lacked was face paint, Viking horns, and a Chewbacca onesie. https://t.co/GHbvBm0mnr

Bredefeld's district is almost entirely within the borders of Clovis Unified, but he put an item on the city council agenda directing the city attorney's office to file a writ of mandate forcing Fresno Unified schools to bring students back on campus. The item made it onto the council agenda, but got voted off the agenda before it came up for discussion.

"My constituents have expressed their concerns that we continue to have a city council determined to prevent discussion on critical issues facing our city, such as lockdowns and our children's education and well-being," he said during his council district report.

The council member wanted Fresno to take a cue from the city of San Francisco, which sued its local school district earlier this month.

That case won't be heard in court until at least mid-March, by which time, coronavirus numbers may change.

But right now, San Francisco is averaging less than half as many cases per capita as Fresno County.

"Bob Nelson's kids are apparently attending school in another school district," Bredefeld said. "Why does he feel that school district is safe for his children but the classrooms at Fresno Unified are not safe for Fresno's children?"

Action News asked Nelson about this and he didn't want to give specifics about the schools attended by the children he adopted out of foster care.

But he did say they have "demographic characteristics mirroring our children served in Fresno Unified's small cohorts who have been back on our campuses in person."

Other council members and the mayor agree that reopening schools is important, but they took issue with Bredefeld's approach.

"I spoke to all the superintendents," said Mayor Jerry Dyer. "All of them want the kids back in school. They really do."

"I agree with what (Bredefeld) said, but we disagree on the conversation starter, which is suing another entity to force them to do something that we want," said Chavez.

State legislators have a plan to prioritize teachers and school staff for vaccinations and get most schools reopened by April.

When we asked Bredefeld if he'd tried to help these efforts, he told us the CDC said teachers don't need to be vaccinated before kids go back to school.
Report a correction or typo
Related topics:
educationfresnofresno county board of supervisorslawsuitfresno unified school district
Copyright © 2021 KFSN-TV. All Rights Reserved.
More Videos
From CNN Newsource affiliates
TOP STORIES