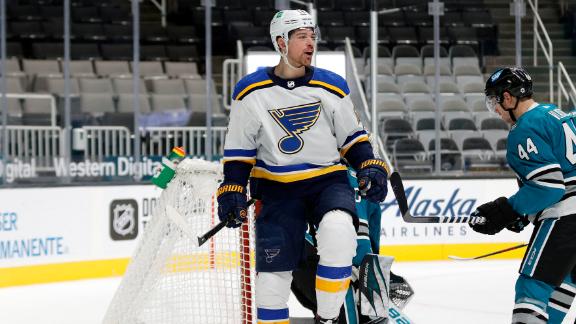 ANAHEIM, Calif. -- - Dakota Joshua scored in his NHL debut and Zach Sanford got two goals in the St. Louis Blues' 5-4 victory over the Anaheim Ducks on Monday night.

Ville Husso made 29 saves for St. Louis in the same arena where he earned his first career win on Jan. 31. Jordan Kyrou and David Perron also scored for the Blues, who won their second straight to open a seven-game road trip despite nearly blowing a three-goal lead in the third period.


"You could say that maybe we backed off of them, but maybe they just played good and we found a way to win," said Perron, who put the Blues ahead to stay early in the second period with his seventh goal of the season. "It wasn't clean at all times, or pretty at all times, but we got the two points, and four out of four (on the trip)."

Isac Lundestrm scored three goals for the Ducks, whose winless skid stretched to a season-worst seven games. John Gibson stopped 30 shots, but Anaheim couldn't quite finish its comeback in a three-goal third period.

"We played great hockey in the third period there," said Lundestrm, whose family was watching in the early-morning hours in Sweden. "We've just got to keep doing that for 60 minutes, keep the puck (and) get some shots on the net and crash the net."

Lundestrm completed his first career hat trick and trimmed St. Louis' lead to 4-3 with 4:44 to play on a deflection of Kevin Shattenkirk's shot. Anaheim then had a 6-on-4 advantage in the waning minutes, but Sanford scored an empty-net goal from deep in St. Louis' end to complete his three-point night.

Ducks captain Ryan Getzlaf scored with 60 seconds to play, but Anaheim couldn't get the equalizer.


After taking his first pregame NHL warmup skate without a helmet because his teammates hid it, Joshua became the 17th player to score in his Blues debut. His shot hit Gibson's blocker, but arced over the Ducks goalie and into the net during the second period.

Joshua is a 24-year-old forward who was drafted by Toronto in 2014, but went to Ohio State. He was acquired by the Blues shortly after leaving college in 2019, and he got that unexpected callup from the AHL last weekend when Jacob De La Rose joined St. Louis' lengthy injured list alongside Jaden Schwartz, Vladimir Tarasenko and others.

"There's a great group of guys in there, and I'm glad I could bring some excitement to them today," Joshua said. "It all happened very fast, and obviously there's been a couple of injury problems up here, so I can't say I expected (the callup), but I've just been working hard and trying to be ready for this opportunity."

Lundestrm, Anaheim's promising 21-year-old forward, put the Ducks ahead early in the first period with his third goal of the season on a clean shot off the rush. He scored on a wraparound early in the third period for his first career two-goal game.

"I do give our guys credit, because they came out in the third and fought like hell, so that's encouraging," Anaheim coach Dallas Eakins said. "But for us to win, it's got to be a full 60 minutes. Every moment is critical in those 60 minutes. We've got to understand that and keep getting better."

St. Louis has won its three games at Honda Center this season by a combined 15-6.