Porterville Unified student-athletes hold protest to be allowed to play 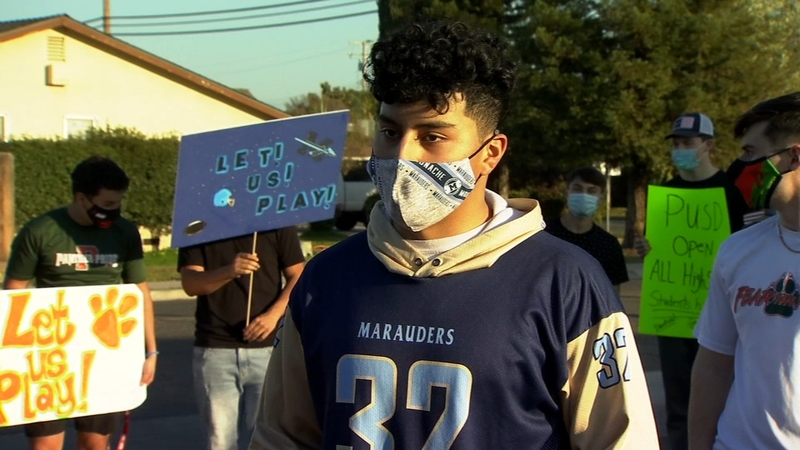 Porterville Unified student-athletes hold protest to be allowed to play

But student-athletes aren't backing down, many of them now demanding they get a chance to play.

A group of football players from several Porterville Unified schools gathered outside the district office on Thursday to protest.

They stood in solidarity demanding another season.

Josiah Perez, a junior at Monache High School, said they're protesting for all high-contact sports the state has given the green light to resume.

"It's clear that California gave us the go-ahead to play those high contact sports, but PUSD doesn't want to," Perez said.

"We have this sport taken away from us that we love, and it's heartbreaking to hear our final year we're going to have to stay indoors," White said.

District officials said the decision wasn't easy, but it was made in part to give those spring athletes who weren't able to play last year a chance for a season.

"The decision was made for the some of those athletes that were shortchanged in 2020. Those seniors didn't have an opportunity to play," said Porterville Unified spokesperson Jason Pommier.

Officials also said there simply aren't enough resources with transportation and staff to have both spring and fall sports happening at once.

Visalia Unified is also is holding off on fall sports for similar reasons.

Student-athletes, however, said they're not backing down. and are willing to do what it takes to win their season back.