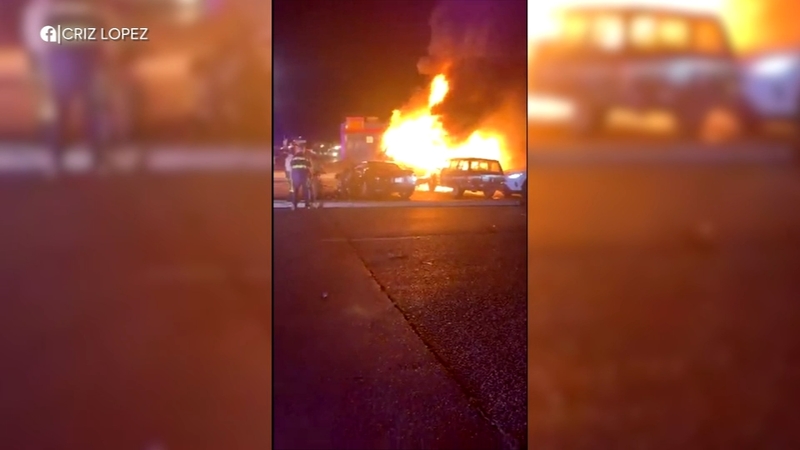 "Vehicle is exceeding past 100, I'll be canceling pursuit at McKinley and Millbrook."

Radio traffic provided by the Fresno County Sheriff's Office details the information a deputy was giving dispatch as he cancelled a pursuit in Central Fresno around 11 p.m. Saturday night.

According to officials, less than 30 seconds later, the driver ran a red light at McKinley Avenue and Cedar Avenue.

He slammed into a car in the intersection before colliding into several others stopped at the light.

"We're really in a time right now where it seems that the respect for authority is at an all-time low when it comes to traffic stops," said Tony Botti with the Fresno County Sheriff's Office.

The deputy chased Portillo for around 25 seconds before ending the pursuit due to his speed.

Radio traffic shows seconds later, the deputy saw the ball of fire, "Lincoln 31, vehicle just crashed, it is engulfed in flames. There is a large explosion at McKinley and Cedar. I was not in pursuit, my lights were not lit up."

"This was 100% preventable, a simple pull over, get a ticket, go on your way. Instead, we have families lives turned upside down." Botti said.

Three people were killed: two women in their 20s who are believed to be related and a man in his 50s.

Portillo and a woman who was in the vehicle with him had major injuries and were taken to a nearby hospital.

Since the crash happened within Fresno City limits, the Fresno Police Department will be handling the investigation.

"That is something that we have to continue educating the public and really discouraging this, this type of activity." Chief Balderrama said.

Charges against Portillo have not been recommended yet, according to the Fresno Police Department.

Officials said detectives will be reconstructing the collision and are in contact with the district attorney's office.

Fresno Police Department said it is still early in the investigation and detectives may have more information toward the end of the week.