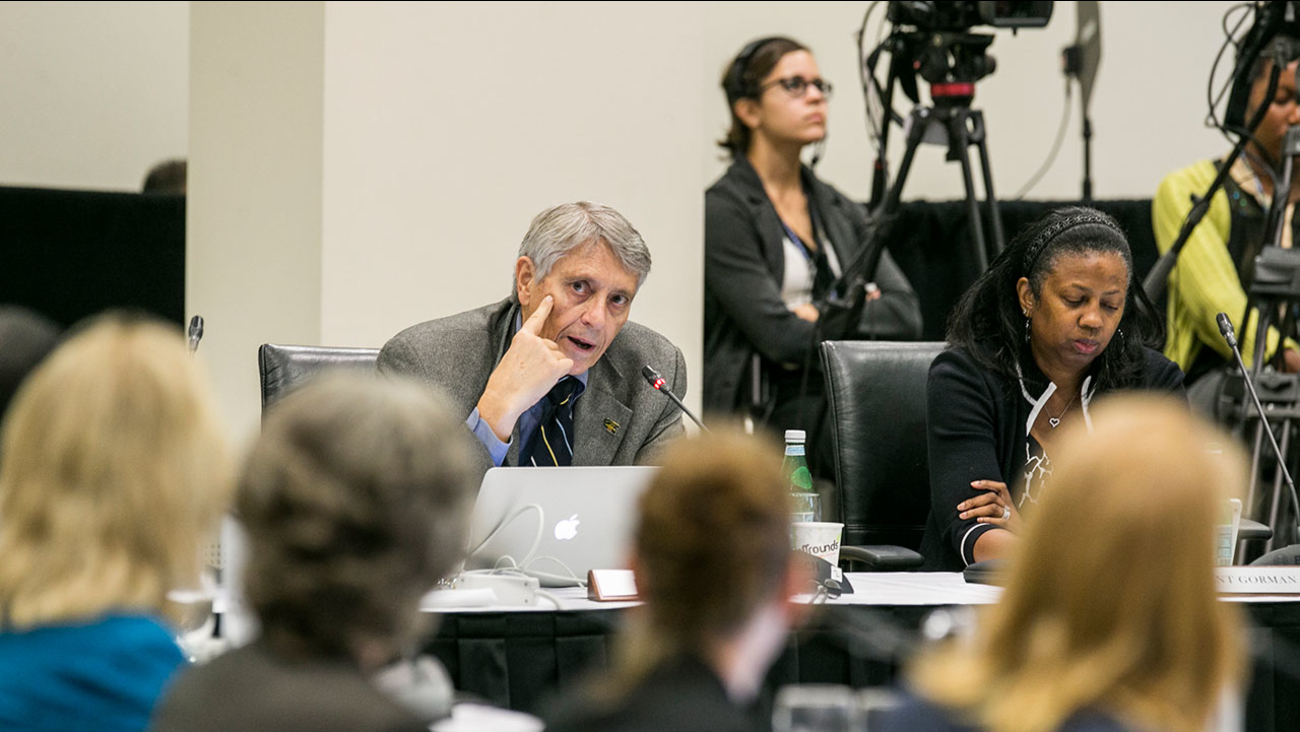 In this Sept. 17, 2015, file photo, Alumni Regents Rod Davis, left, and Yolanda Gorman address the University of California's Board of Regents meeting.

AP
By CHRISTINE ARMARIO
LOS ANGELES -- Students, professors and activists wrangled at a public forum Monday on how best to address intolerance at the University of California, with some Jewish groups arguing the schools should adopt a policy with a more precise definition of anti-Semitism and others saying it would stifle free speech.

A working group of regents and university leaders invited input as it works to revise a proposed policy denouncing intolerance, which Jewish organizations criticized in September as not going far enough to deter what they describe as a spike in anti-Semitism on UC's 10 campuses.

The public system with nearly 250,000 students has become a focal point in the discussion of freedom of expression and civil liberties on college campuses following several high-profile incidents, including one in which swastikas were spray-painted on a Jewish fraternity house.

"Jewish students are fearful to show their support for Israel," said Leore Ben David, a campus coordinator for the Zionist Organization of America. "I am not here today to silence criticism of Israel. I am asking this working group to take a stand against racism and injustice."

David and other Jewish groups pressed university leaders to adopt the U.S. State Department's definition of anti-Semitism, which includes denying Israel's right to exist and blaming it for all interreligious or political tensions.

UC President Janet Napolitano said in a radio interview in May that she believed the system should adopt the definition. Her remarks drew criticism from First Amendment advocates and those critical of Israel's policy toward Palestinians, saying it could be used to censor free speech.

"I am part of a community of Jews and scholars who are critical of Israel," Mandy Cohen, a doctoral candidate in comparative literature at UC Berkeley, said Monday. "They are, in fact, seeking to silence me."

Jewish students and professors described a hostile campus environment in which taking a stand either for or against Israeli policies invites harassment. UC Berkeley student Kelsey Waxman said she has been branded a "self-hating Jew" for condemning Israeli occupation of Palestinian territories.

Yaeli Steinberg, a recent UC Davis graduate, said she had trouble filling spots in a Jewish sorority house because students feared they would be targeted. She said anti-Israeli sentiments quickly become anti-Jewish.

"I'm being accused of doing something that has nothing to do with me," she said of Jewish students getting criticized over Israeli-Palestinian violence. "That's threatening."

The initial policy drafted by the UC president's office defined intolerance as "unwelcome conduct" motivated by discrimination or hatred toward a group or individuals. It had outlined various acts including harassment, hate speech and derogatory use of cultural symbols but did not address any particular group.

David Myers, a professor of Jewish history at UCLA, told the working group that he and other scholars believe any policy the board adopts should include but not focus largely on anti-Semitism alone. He said the UC system's spirit of openness was at stake.

"We do not want to stifle that spirit," he said. "At the same time, we want the university to feel safe and secure."

In the coming weeks, the working group will meet with experts on the First Amendment, anti-Semitism and campus tolerance. They will then begin to draft a new policy they hope to put before the board of regents in March, Regent Norm Pattiz said.

"We're here to listen," Pattiz said. "What I'm feeling is there are an awful lot of people who have addressed the group who want to find a solution."

It will be a challenge for the working group to draft a policy that more precisely defines intolerance without infringing on free speech protections, said Peter Scheer, executive director of the First Amendment Coalition. No other public university system has adopted the State Department's definition of anti-Semitism.

"In all but the most extreme circumstances, they're going to find that the First Amendment is an obstacle that they cannot surmount and shouldn't," he said.
Related topics:
educationlos angelesuclos angelescollegecalifornia
Copyright © 2020 by The Associated Press. All Rights Reserved.
CALIFORNIA