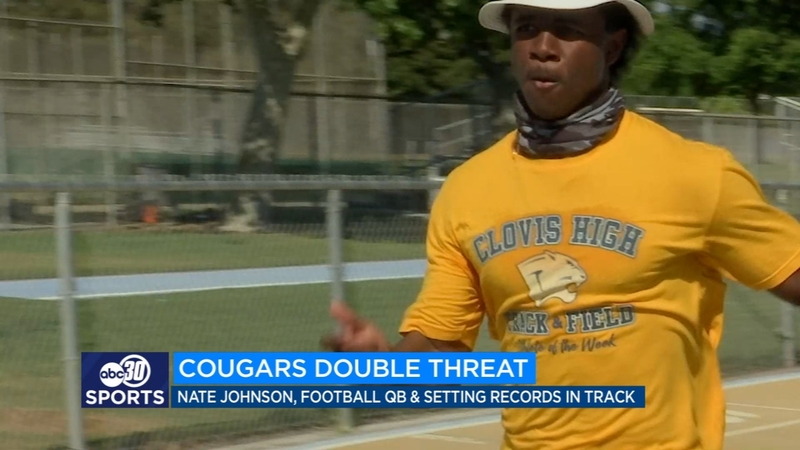 CLOVIS, Calif. (KFSN) -- For the second straight season, there will be no state track meet at Buchanan High.

But as the unique regular season gets ready to come to a close, one quarterback who traded in his cleats for spikes and is having a record-setting season.

Dual threat quarterback Nate Johnson led the Cougars to a 3-2 record on the gridiron this season. He's received offers from Fresno State and a handful of Power Five schools including Arizona State, Oregon State and Michigan.

"I know he's a football guy, I wish he was a track guy but maybe he can do both at the next level," says Cougars track coach EJ Jackson.

Johnson is capable of not just playing division one football but also running at the top level.

"I'd say that's very underrated especially for a quarterback because nobody expects quarterbacks to be fast," says Johnson.

The junior, whose track career started in the second grade, came into this season with the goal of besting Clovis' school record of 10.8 seconds in the 100 meter dash. He'd tie that time in just his second meet of the season.

"Football, you can have one playoff, but in track if you don't get out of the blocks or cross the line at a certain time you lost, so I think it's the best thing for football players," says Jackson.

Two weeks ago, at the West Coast Relays, he ran this year's fastest 100 meter dash time in California.

At that same meet - the Cougars 4X100 relay team also recorded the fastest time in the state and is just a second away from setting the school record of 41 seconds. The team ran a time of 42 seconds at the Arcadia Invitational last weekend. They're aiming to beat the school record which is 41 seconds.

Johnson has been on the relay team since freshman year and enjoys being the anchor.

"It's really fun trying to finish the race, when you get the baton and you know your faster than them and you can run them down and the crowd is like ohh and it get's really exciting," Johnson says.

The quarterback says he grew up watching the Olympics and tries to emulate Usain Bolt.

"How he turns over his legs and pulls away from people, I try to work on it and simulate it."