With the majority of the department on scene, fire crews were unavailable for medical calls for hours.
KFSN 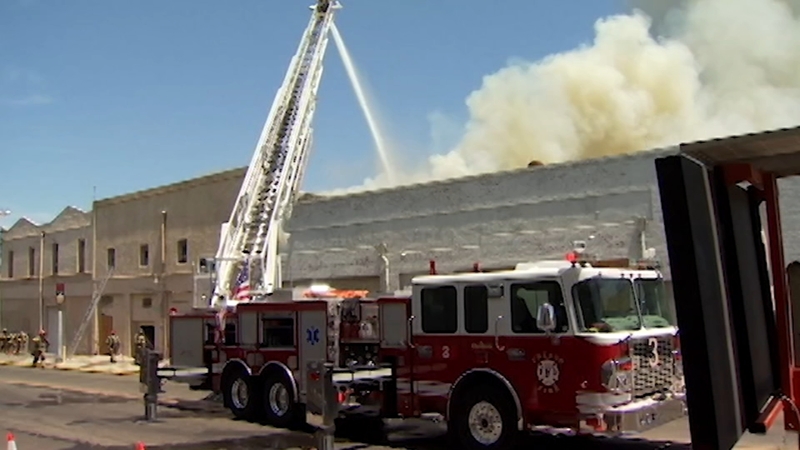 FRESNO, Calif. (KFSN) -- On Monday afternoon, crews were called out to extinguish a fire burning in a commercial building near Chukchansi Park in downtown Fresno.

The fire was burning near H and Mono Streets and smoke could be seen from the top of the vacant building.

Roads in the area were closed as 55 firefighters battled the flames.

#BREAKING @FresnoFire crews are battling a two-alarm fire at H st and Mono. This is the view from our downtown Fresno Skycam. Thick smoke can be seen billowing from the building as crews work to douse the flames. Live update on @ABC30 at 12:25. pic.twitter.com/JCExFRrg1C

With the majority of the department on scene, fire crews were unavailable for medical calls for hours.

It's a job that fire chiefs say would typically require half the amount of personnel.

But with triple-digit days underway, more people are needed to cycle out on the job and avoid fatigue.

"Not just for the health of our firefighters but for the ability to be able to maintain a response. If these guys get hot, that's it, they are done they are going home for the day," said Battalion Chief Brian Price.

Fresno Fire uses a temperature-humidity index to determine how much time firefighters can spend battling flames and how much time is needed to recover.

"Getting out of these turnouts, getting out of this gear, bringing that core temperature down. We have cooling chairs around the corner where they will actually put their arms in ice water to try and circulate," said Price.

City data shows the department has seen a record number of calls in recent months. In the first five months of 2021, just shy of 3,000.

Pending federal funding, by next year, the city could have more than 60 new firefighters, boosting daily staffing from 81 to 95.

In the meantime, fire officials ask that you reduce the risk around your own home.