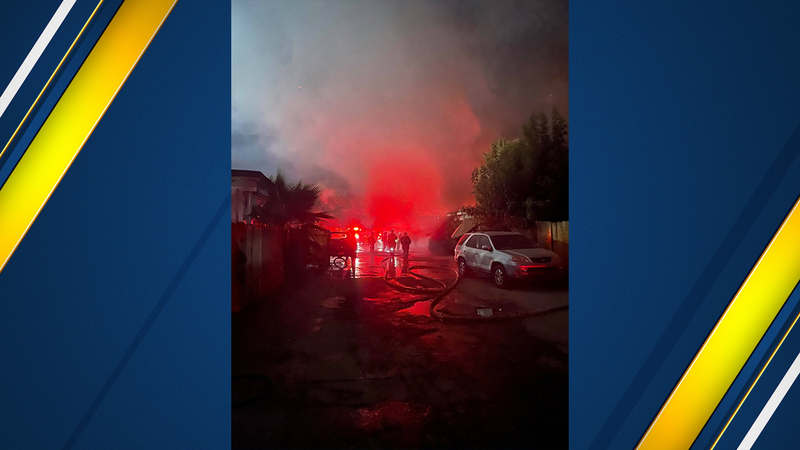 FRESNO, Calif. (KFSN) -- Firefighters are once again investigating what led to a fire at a northeast Fresno mobile home park.

The fire sparked at the Trails End Mobile Home Park on Sierra Avenue and Clark Street shortly before 10:00 pm.

Firefighters got an initial call about a tree on fire. When they arrived, they saw the flames spread to two trailers and moved toward a third.

Two of the three mobile homes that caught fire are a total loss.

No one was hurt, but one person was checked for smoke inhalation.

Fire crews also rescued a dog and several cats. The SPCA was contacted to help with the animals.

"The main challenge was to contain this fire from burning multiple homes. Fortunately, we held it to three, which is a significant challenge," Fresno Fire Battalion Chief Sean Johnson.

The same mobile home park was the scene of a deadly fire just two months ago, which prompted Fresno Mayor Jerry Dyer to take action.

The Fresno City Council is expected to vote Thursday on an ordinance drawn up after that deadly fire. Mayor Dyer and Councilmember Garry Bredefeld made the proposal last month.

RELATED: Fresno leaders aiming to give control of mobile home parks to city

The California Department of Housing and Community Development (HCD) says it suspended the Trails End Mobile Home Park's permit in January because the park was unsanitary.

Fresno city officials say the HCD should have contacted the city to alert code enforcement to move in, but that never happened.

If approved, the new ordinance would give Fresno full control of all code enforcement duties related to mobile home parks in the city.