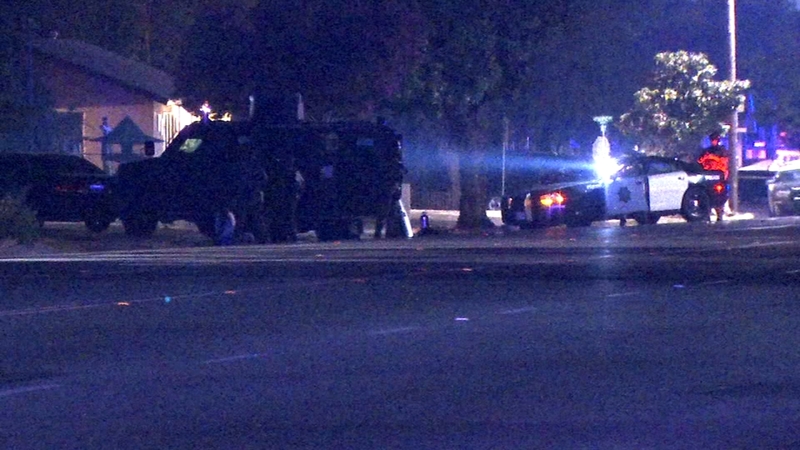 FRESNO, Calif. (KFSN) -- An hours-long police standoff in central Fresno ended after a man suspected of domestic violence was taken into custody overnight.

It started just before 3 pm on Monday at a house on Shields and Delno Avenues. Police say they received a 911 call from an alleged victim.

Officers spoke with a woman who told them her husband came home from work. They got into an argument, and then she said he assaulted her.

She said she ran out of the house and called the police, leaving her husband and their two-year-old daughter inside the home.

Crisis negotiators spent hours working to stay in contact with the barricaded man. Authorities tried negotiating with him to release the child.

Late Monday night, he gave up the child to a SWAT officer.

The suspect appears to have just set the front of the home on fire. I’m not posting video right now, given the situation. @ABC30 pic.twitter.com/s2ddjpcavh

Moments later, he started to pour gasoline on his front porch and set it on fire.

Police officers helped to douse the flames. The fire did not appear to damage the home.

At around 1 am on Tuesday, officers threw tear gas into the house. The man tried escaping through the back, but officers were able to take him into custody.

Investigators said, after many hours, they're thankful the incident ended peacefully.

"Nothing was rushed. Our Crisis Negotiation Team did a great job in communication with this individual, who didn't want to be communicated with at times, and successfully bringing this to a calm resolution to turning the child over," said Fresno Police Lt. Brian Valles.

He was taken into custody and then to Community Regional Medical Center, where he was treated for exposure to tear gas.

He will be booked into the Fresno County Jail on several domestic violence charges and for having an illegal rifle in the home.

Police say the woman is expected to be OK. The little girl was returned safely to her.