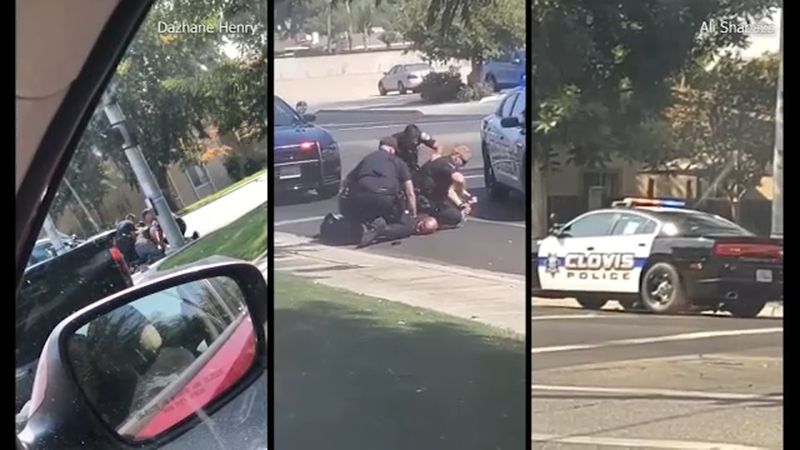 CLOVIS, Calif. (KFSN) -- Several videos circulating on social media show the moments a man is taken into custody through use of force by Clovis police officers.

Clovis resident Robert West says moments before the video was captured on Tuesday, he had an unusual encounter with the man seen being taken into custody.

West says, "He acted kind of funny when he ran by me. The lady with me said, 'I think he's high on dope.'"

Just feet away from Gettysburg and Peach, West and a neighbor watched as an officer, patrolling the area, tried to detain 53-year-old John Bartram of Fresno, who investigators say appeared to be under the influence.

"He was hollering, screaming and cussing. They were in the right," said West.

As backup arrived, three people nearby captured videos on their cell phones.

Lt. Jim Munro says there is a lot more to the encounter than meets the eye.

"What you can't see on the video is that he was kicking, reaching for the officer's taser and trying to bite one of the officers on the foot," he said.

He adds prior to that, police body camera video shows the suspect running away from the initial officer who made contact and after a struggle, he deployed his taser multiple times over several minutes but it was ineffective.

When backup arrived, attempts to cuff Bartram were unsuccessful, so Munro says they used what are called "distraction strikes."

Legal Analyst Tony Capozzi says a complaint should be filed with the city.

"It just seems to me like an overreaction to someone who had already been tased even if the taser didn't take full effect," he said. "This is an overreaction by the Clovis Police Department. He may have been overreacting himself but in this video, you don't see an overreaction. The only time you see some kind of resistance is when an officer is hitting him on his head."

Court records show Bartram has been arrested, convicted and served time in prison for several felonies, the most recent in June. On the day the video was recorded, there was an active warrant out for his arrest for attempted burglary and resisting an officer.

Bartram was taken to the hospital to be treated for an injury to his arm and to undergo a toxicology screen. He faces two felonies, including battery on a police officer.

Clovis police have said so far, there are no plans to release the body camera footage. They did, however, say any time force is used, the incident including body camera video is reviewed by a group of administrators, supervisors and defensive tactics instructors.