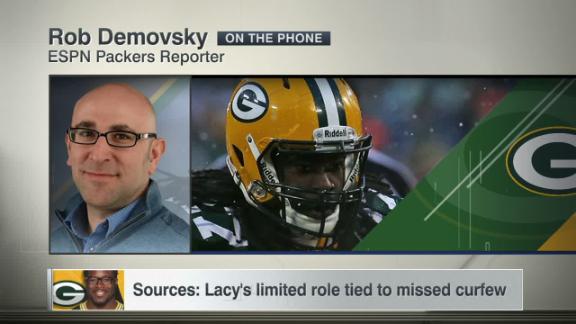 The Packers demoted Lacy for Thursday night's game against theLions and cut Harris only hours before kickoff.

Despite coming off his best two games of the season, Lacy played behind starter James Starksagainst the Lions, seeing only 19 snaps and not touching theball after he lost 3 yards on a second-quarter pass. Rookie John Crockett, who was promoted from the practice squad to take Harris' spot, got the call in the second half over Lacy, who finishedwith only 1 total yard of offense.

After the game, Lacy would not comment on the reason for his demotion.

"I don't feel as though that's something I should get into yet," he said.

On Friday, Packers coach Mike McCarthy called it "an internal football decision that was made. That's what resulted in Eddie's reps." When asked whether it was a disciplinary move, McCarthy added: "Could be. But those things we don't discuss in here anyway. It's something that we handled internally, and that was the outcome."

Asked earlier Friday at his news conference what Lacy needs to do to to regain his starting job, McCarthy said, "He needs to build off his preparation. He's put up some yards in the prior games, but he can be better. We need to be better as a team, frankly. I discussed this in our team meeting. There's a lot more to give. The fine details are not where we want them to be. There's a formula for us to get it there. That was made clear to our players and with the expectations and the commitment that we've made to each other, and we've got to do a better job. We're not clicking for four quarters in all three areas, and that's what we're working for."

The Packers worked out former Denver Broncos running back Montee Ball on Friday. Like Lacy, Ball was a second-round pick in 2013.