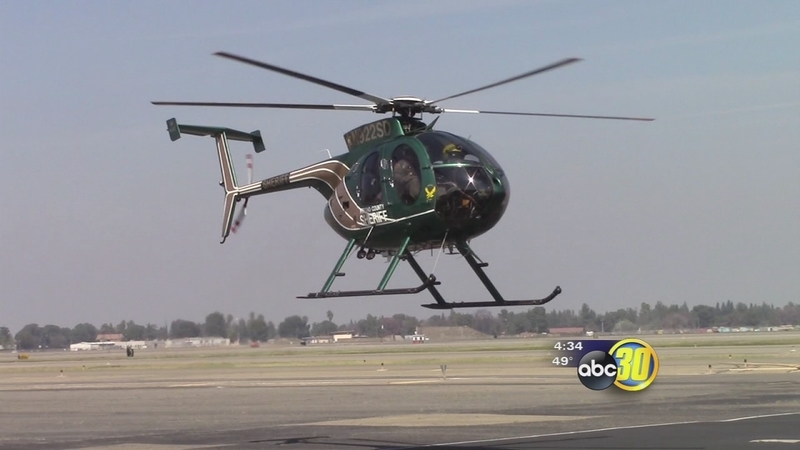 FRESNO, Calif. (KFSN) -- Video provided by the Fresno County Sheriff's Department showed the County Board of Supervisors the value of a helicopter equipped with an infrared camera in catching suspects.

In the video played at Tuesdays Board meeting, the suspect ran from his vehicle, laid down in a farm field and covered himself with dirt. Deputies on the ground couldn't see him, but the helicopters camera picked up his body heat, and deputies and their dog were able to catch him. Sheriff Margaret Mims told the Board of Supervisors the department's two helicopters are valuable tools. "During the last 5 years, the air support unit has participated in 74 search and rescue operations and 1,137 calls for service resulting in an arrest."

The department's helicopters, Eagle 1 and Eagle 2 were both built in 1991 and purchased used in 1996. They've flown a total of more than 30,000 hours. The sheriff wants to replace one with a new, more powerful version from McDonnel Douglas, which would be faster, fly higher, and carry more and be better able to handle search and rescue operations in the high Sierra. Supervisor Brian Pacheco said the terrorist threat was a reason for his support. "I believe the events of the past week show that we need to have our best and finest equipment."

Of the choppers $3.5-million cost, $1.4-million will come from asset forfeiture funds, money mostly seized from drug dealers, the rest from the current Sheriff's Dept. budget and savings from prior years.