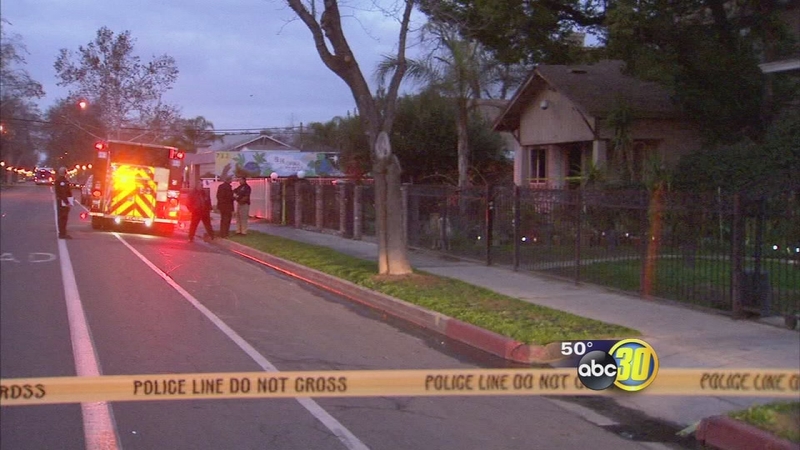 FRESNO, Calif. (KFSN) -- Police say a man who had been stabbed was found inside a burning Central Fresno home. He was pronounced dead at the hospital and the neighborhood is in shock.

The smoke was spotted by neighbors on Van Ness, just north of Belmont around 3:00 in the afternoon on Wednesday and firefighters just happened to be a few doors down on an unrelated call. Battalion Chief Todd Tuggle said, "While the 911 call was going in, neighbors were flagging down our engine company."

The home was heavily secured with a gate so firefighters had to force their way in. After a quick search, they found a man in the kitchen, unconscious and bleeding from several stab wounds. He was taken to the hospital and pronounced dead. Lt. Joe Gomez with the Fresno Police Department said, "Unknown if the stab wounds caused the death or the smoke inhalation, it's too early to tell."

Investigators call the death suspicious and they believe the house was intentionally set on fire.

Tamara Olivarria who lives across the street said, "He just got those lights fixed and the gate is locked so I'm not sure how anyone would have got in even, but it's kind of scary."

Police haven't confirmed it but neighbors say the victim is a man in his mid-40's-- a man who lived alone and worked on boats at the home. Theresa Fuentes says he was a friend and she's not sure why anyone would want to hurt him. "If it's a random thing, that makes it much scarier...cause the neighborhood is getting better, we thought," Fuentes said.

Olivarria added, "It's sad, you know, I hope he didn't experience a lot of pain."