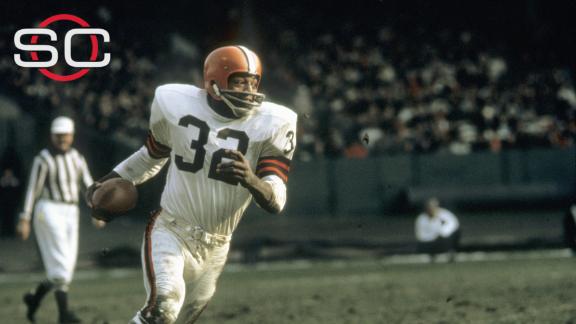 Hall of Fame running back Jim Brown will be immortalized by the Cleveland Browns later this year when a statue bearing his likeness will be erected outside FirstEnergy Stadium, the team announced Wednesday, the same day Brown turned 80.

"It humbles me to be honored in this manner," Brown said in a news release. "[Browns owners] Dee and Jimmy Haslam, thank you for the respect and love. Your investment in Cleveland is unparalleled. To the fans of the Cleveland Browns, I guess I'll always be with you -- thank you."

Brown rushed for 12,312 yards and held a 5.2 yards per carry average during his career that spanned the 1957-65 seasons. He was also named a Pro Bowler every year he played. Since his retirement, no Browns player has worn his No. 32.

Sculptor David L. Demming, a Lakewood, Ohio native, has been commissioned for the statue, which will be placed outside the southeast corner of the stadium. The statue will be unveiled during the Browns' alumni weekend later this year.

"Everyone admires the incredible impact that Jim Brown has made for Cleveland, the Browns and the NFL throughout his lifetime, and we have had the special opportunity to know and learn from his contributions to our team on a personal level, as well," the Haslams said. "It is only fitting that one of the most iconic professional football players and members of Cleveland and the Browns is commemorated with this statue as he will always be such a permanent fixture in our city."

Brown rejoined the Browns as a special adviser in 2013.

New Browns coach Hue Jackson told Cleveland.com that he plans to lean on Brown this season for advice.

"I'm looking forward to finding out as many things as Jim Brown knows that can help our football team be the best that it can be," Jackson said. "We're talking about a guy that did it as well as anybody ever, so it would be really smart on my part to sit and talk to him and have him tell me the things that he sees and that he's felt.''