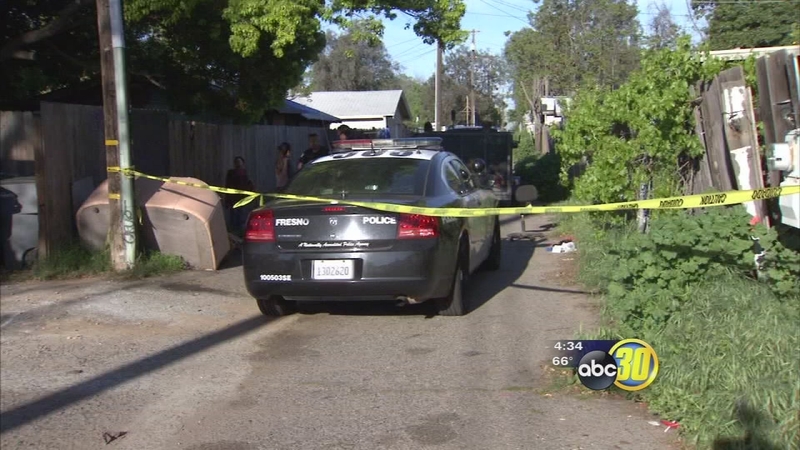 FRESNO, Calif. (KFSN) -- A gardener is recovering from several stab wounds after he was attacked by a carjacking suspect in Central Fresno.

It happened at a home near Second Street and Washington Avenue, near Belmont Avenue.

Crime scene tape covered the alley outside of the home after a gardener was stabbed multiple times. His aunt Virginia Angulo told us by a translator that she heard his cries for help and was scared.

"She said 'yeah' because he was fainting when the ambulance got here for him," Angulo said through a translator. "He was losing a lot of blood."

Fresno Police said the victim was stabbed three times in the upper body and even broke his shoulder. Officers say just after 8 a.m. the gardener was weed whacking the property when the suspect, dressed in black, came out of nowhere and approached the man.

"He demanded keys to the victim's car which is in the alleyway," Sgt. Pete Boyer with the Fresno Police Department said. "The victim refused and the suspect stabbed him multiple times at that area."

The suspect ran away.

The victim works as an independent gardener and was doing a good deed when the attack unfolded. His aunt tells said he stopped by that morning just to help out the family to do some yard work for an upcoming baby shower.

Neighbors were upset to hear what had happened.

Gonzalez says he feels for the family and hopes the victim recovers.

"Those guys don't bother anyone, but it's just around here it's just really violent sometimes," Gonzalez said. "You hear gunshots right there, down there down the alley. This area is not a good area."

Investigators combed the area for any sign of the suspect, who is described as a younger, thin male. They say the suspect could face attempted carjacking and assault with a deadly weapon for the attack.