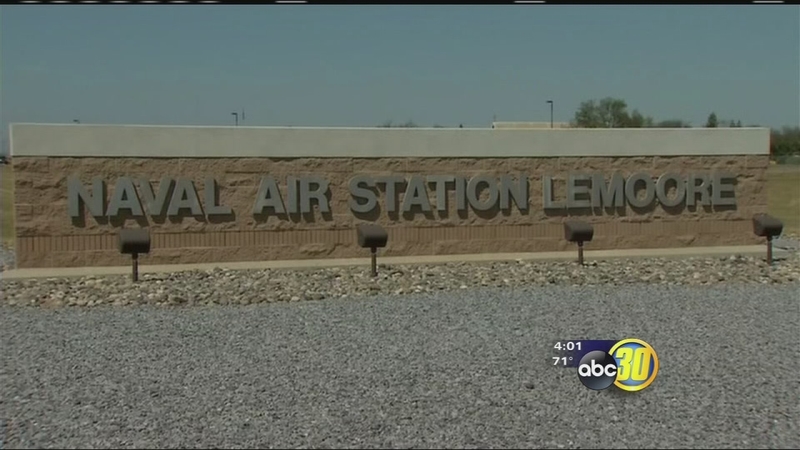 NAVAL AIR STATION LEMOORE , Calif. (KFSN) -- Two people were killed after a car collided into a parked military jet, inside Lemoore Naval Air Station. The investigation now focuses on what happened outside the base gates that led to the deadly ending. Action News has also learned that both have arrest warrants from out of the bay area and the driver had been arrested before in Kings County.

Hours after the crash, officials with Naval Air Station Lemoore and the California Highway Patrol gave a briefing on the incident, which they called unfortunate.

Somehow, the driver of a Jeep Grand Cherokee being pursued by the California Highway Patrol managed to get inside Naval Air Station Lemoore, before he crashed into the tail end of an F/A-18 jet.

The female passenger died at the scene, and the driver later died at Community Regional Medical Center in Fresno.

"The pursuit was probably approximately, maybe, four minutes. It wasn't very long, it went along the public access road here at the base after the vehicle was traveling in the wrong direction. After it passed the checkpoint, our units stopped at the checkpoint to coordinate with Naval security forces at that time," Lt. Dave Knoff, CHP

It's unclear how fast he was driving near the entry control point on the west side of the base, but at one point during the pursuit speeds reached 100-miles-per-hour.

The investigation into how the driver cleared the control point is still underway, but base commander Captain Monty Ashliman said NAS Lemoore is fully operational and safe.

"Anytime there's something like this, we'll certainly take a look at where we can get better. Whether that's a misstep that we had, whether it's assets that we need, or a different way of doing business, but we'll absolutely take serious this incident and figure out how we can get better and prevent it from happening tomorrow," Cpt. Ashliman, LNAS Commander.

The California Highway Patrol said the pursuit started late Wednesday night after conducting a welfare check on a Jeep parked on the side of the road. The vehicle sped away, driving erratically, and at one point went the wrong way on Highway 198. It then followed Reeves Boulevard alongside the base, before entering a control point.

Action News has also learned that both have arrest warrants from out of the bay area and the driver had been arrested before in Kings County.

The two killed in the crash have been positively identified by the Kings county coroner, but they are not releasing the names as they are still working on notifying next of kin.

A California highway patrol officer spotted a purple jeep Cherokee parked on Jackson avenue near highway 41 at around 11:30 Wednesday night. The officer pulled up behind the car and flashed his spotlights.

"He drove away pretty much as soon as they turned the lights on. They followed behind and noticed he was driving erratically and they decided to make an enforcement stop on the vehicle by turning on their lights. The pursuit ensued from then on," said John Taylor, CHP.

CHP said the pursuit started on Jackson Avenue and went through the Avenal Cutoff intersection. At that point the pursuit temporarily stopped as the suspects were driving on the wrong side of the road. Once they got back on the right side the pursuit began again, but ended once the two drove onto the Navy base.

"When they're willing to break the law, and put themselves in a crime that will put them away for possibly years in prison-- decisions that they make are completely unknown at that point," said Taylor.

Officers believe the two were driving on base for some time as the time between the start of the pursuit and the crash on base is 22 minutes. A drive that's really only a few miles long.