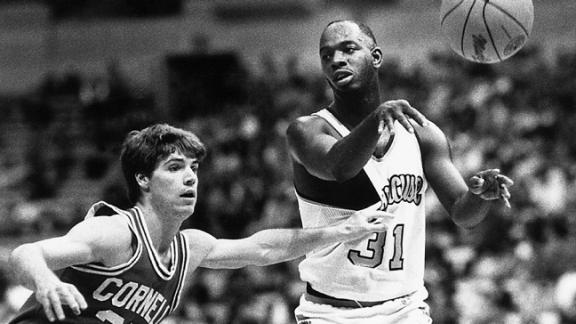 Former Syracuse great Dwayne "Pearl" Washington has died, according to his family. He was 52.

Washington was diagnosed with a brain tumor last summer. He had surgery in the fall.

Washington grew up in the Brownsville section of Brooklyn, New York. At a young age, he displayed such skill on the court that locals dubbed him "The Pearl" because his game resembled that of NBA great Earl "The Pearl" Monroe.

Washington excelled at Boys and Girls High School in Brooklyn and he was the nation's most sought-after recruit in 1983. When Washington, a point guard, committed to Syracuse, coach Jim Boeheim said the program was changed forever.

"I can't underscore how big a moment that was for our program," Boeheim said in the book "Color Him Orange: The Jim Boeheim Story." "I believe at that point we officially went from being an Eastern program to a national program. Everybody knew who the Pearl was. I'd get off of a plane in L.A. and somebody would say, 'There's Pearl's coach.' He was the guy who opened the door for us and enabled us to land recruits not just from the East Coast or the Midwest but from the entire country."

Washington's most memorable moment at Syracuse came on Jan. 21, 1984. With a home crowd of 30,293 watching, Washington made a running 45-foot shot at the buzzer to give the Orange a 75-73 win over Boston College. Washington, who finished with team-high 20 points and seven assists, held both his arms high in triumph as he sprinted off the court and straight into the tunnel leading to the locker room. With the win, Syracuse remained the only undefeated team in the Big East.

''We never had a shot like that for or against us in my 15 years at Syracuse,'' Boeheim told The New York Times on Jan. 23, 1984. ''When I got home, I couldn't go to sleep, so I watched the replay of the Virginia-Clemson game and then watched Washington's shot five or six times. The more I watched, the more I thought it was a miracle. But Dwayne makes miracles happen. He thinks he can make every shot he takes. He hasn't been playing like a freshman but like a veteran who has played the game all his life.''

Washington earned All-America recognition at Syracuse from 1984 through 1986. He was named first-team All-Big East three times, and he was the conference tournament's most valuable player in 1986. He led the Orange in assists and steals during each of his three seasons with the school. Syracuse was 71-24 when Washington was with the team.