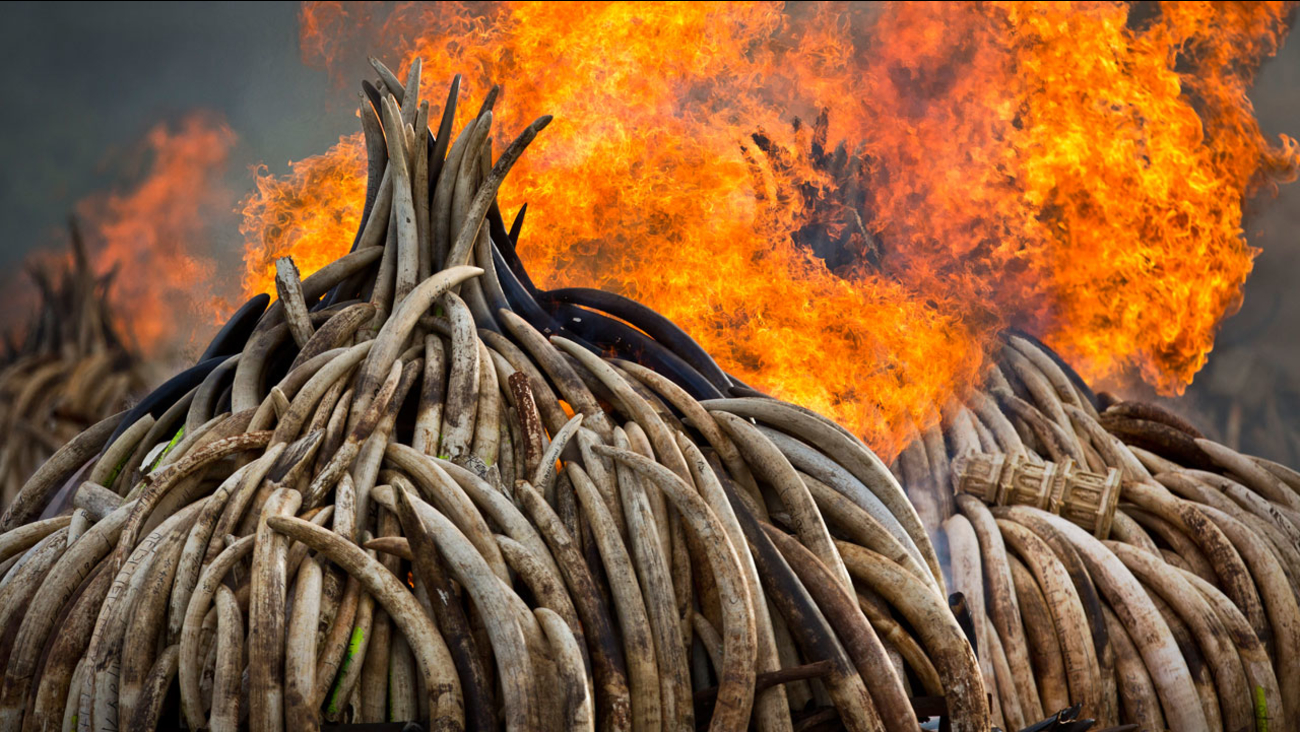 An ivory statue, right, lies on top of pyres of ivory as they are set on fire in Nairobi National Park, Kenya Saturday, April 30, 2016. (AP Photo/Ben Curtis)

NAIROBI, Kenya -- Kenya's president set fire Saturday to 105 tons of elephant ivory and more than 1 ton of rhino horn, believed to be the largest stockpile ever destroyed, in a dramatic statement by this East African country against the trade in ivory and products from endangered species.

Uhuru Kenyatta put a flame to the biggest of 11 pyres of ivory tusks and one of rhino horn in a chilly afternoon. Overnight torrential rains had threated to ruin the event but stopped midday leaving a mud field around the piles inside Nairobi National Park.

"A time has come when we must take a stand and the stand is clear ... Kenya is making a statement that for us ivory is worthless unless it is on our elephants," Kenyatta said.

The stacks of tusks represent more than 8,000 elephants and some 343 rhinos slaughtered for their ivory and horns, according to the Kenya Wildlife Service.

Kenya will push for the total ban on trade in ivory at the 17th meeting of the Convention on International Trade of Endangered Species to be held in South Africa later this year, said Kenyatta.

The pyres were fueled with about 20,000 liters of jet fuel and oxygen, said Robin Hollister, the event's fire master, as a thick plume of white smoke billowed over the yellow flames consuming the ivory. Hollister earlier said it's not known how long the fire will take because the burning of such a quantity is unprecedented.

Kenya decided to destroy the ivory instead of selling it for an estimated $150 million. Some critics had suggested that the money raised from the ivory sales could be used to develop Kenya and protect wildlife. But Kenyatta said that Kenya wants to make the point that ivory should not have any commercial value.

Others said the burning will not end the killing of elephants because international gangs take advantage of Kenya's porous borders and corruption to continue the illegal trade.

Kenya Wildlife Service chairman and renowned paleoanthropologist and conservationist Richard Leakey said the burning of the ivory should encourage African countries to support a ban in ivory trade. He said a group of countries which is advocating for the sale of ivory in the continent should be ashamed.

"We will burn ivory and we hope every country in the globe will support Kenya and say never again should we trade ivory," Leakey said.

The elephant populations worst hit by poaching are in Tanzania, Gabon, Cameroon, Central African Republic, Mozambique, Republic of Congo and Congo. The years 2011, 2012 and 2013 witnessed the highest levels of poaching since a poaching crisis in the 1980s, according to Kenya's Wildlife Service.

Cameroon said it burned over 3.5 tons of tusks earlier in April as a statement against poaching.

Central Africa's forest elephants have declined by two-thirds between 2002 and 2012. Most of the remaining forest elephants are in Gabon and are under threat from armed groups, said Gabon's President Ali Bongo Ondimba, who attended Saturday's burning. He vowed to stop the decline of the species.

"To all the poachers, to all the buyers and foreign traders, your days are numbered," said Ondimba. "We are going to put you out of business and the best thing to do is to retire now."
Related topics:
africawild animalshuntingu.s. & worldendangered species
Copyright © 2021 by The Associated Press. All Rights Reserved.
TOP STORIES
3 killed in multi-vehicle crash in Tulare County
Police investigating deadly shooting in southeast Fresno
Fresno's Tower District gets biggest makeover in 60 years
Man killed, 16-year-old boy injured in Fresno County homicide
Bacon may disappear in California as pig rules take effect
Miss Winkles Pet Adoption Center reopens after 16 months
Driver, 2 passengers killed after car slams into tree near Caruthers
Show More
Mudslides force more than 100 to spend night on highway
Fresno's Boy Scouts go to camp
Woman hit and killed on Highway 99 in Fresno area
Federal eviction ban expires after Biden, Congress fail to extend it
Pedestrian hit and killed on Madera roadway
More TOP STORIES News