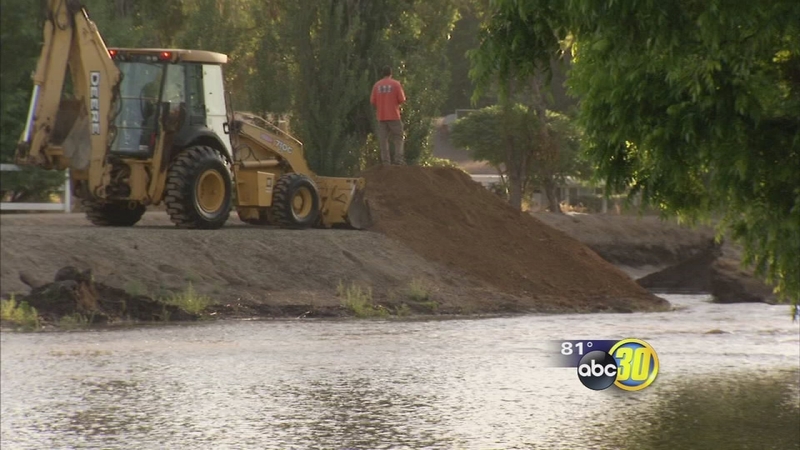 CLOVIS, Calif. (KFSN) -- People living near Sunnyside Avenue in Fresno County are drying out after a breach in the Enterprise Canal unleashed thousands of gallons of water.

Officials say burrowing ground squirrels are the likely culprit and they have a plan of attack.

Twelve hours after a canal breach flooded Sunnyside Avenue Steve Shoemaker is left with a yard of scattered fruit, a polluted pool, and lots of drying out to do.

"Probably needs to be emptied, cleaned, and then fresh water and new chemicals and completely clean through the filter system."

The clean-up has been sped up with help from the Fresno Irrigation District, which owns the Enterprise Canal. Crews helped pump water out, and sent an insurance adjuster door to door to assess the damage and work on claims.

"They brought a lot of people out here. They got a lot of dirt from areas which they filled the breach with. And they've been coming around checking on all the homes," said Christopher Crouch, lives on N. Sunnyside.

But despite the quick and excellent response some still wonder if all this could have been prevented.

"I would think that if anyone was coming along seriously looking for this problem, they should have seen evidence, if it was bad enough for it to cave," said Crouch.

The Fresno Irrigation District said they have someone inspecting this 30 mile stretch daily. But officials admit it is possible to miss things.

Countywide, there are about 480 miles of canals workers also inspect periodically.

"I've been here at the district years and I've never seen a breach in that location. Unfortunately, it wasn't the right time when folks drove by," said Gary Serrato, Fresno Irrigation District.

Irrigation workers said they will go back and re-inspect the integrity of the walls. As well as look into ways to treat the rodent population to ensure scenes like this never happen again.