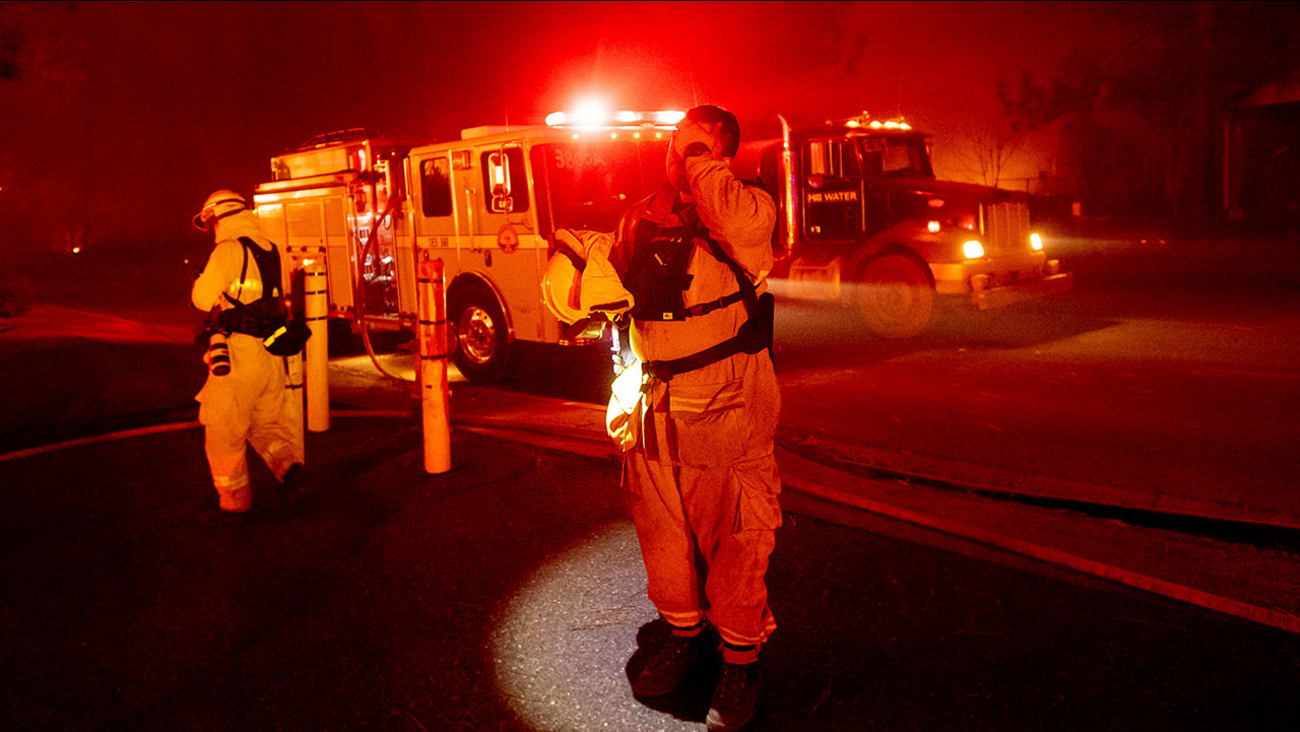 PARADISE, Calif. (AP) -- The air thick with smoke from a ferocious wildfire that was still burning homes Saturday, residents who stayed behind to try to save their property or who managed to get back to their neighborhoods in this Northern California town found cars incinerated and homes reduced to rubble.

People surveyed the damage and struggled to cope with what they had lost. Entire neighborhoods were leveled and the business district was destroyed by a blaze that threatened to explode again with the same fury that largely incinerated the foothill town.

Butte County Sheriff Kory Honea said Saturday 14 additional bodies were found, bringing the death toll from the blaze to 23. He said an additional search and rescue team was being brought in to search for remains.

The flames burned down more than 6,700 buildings, almost all of them homes, making it California's most destructive wildfire since record-keeping began. There were 35 people still missing.

Sheriff's deputies recovered human remains from at least five homes as they went house-to-house in Paradise canvassing for the missing. It was unclear if the remains were in addition to the nine fatalities already reported by the Butte County Sheriff's Office.

More firefighters headed to the area Saturday, with wind gusts of up to 50 miles per hour expected, raising the risk of conditions similar to those when the fire started Thursday, said Alex Hoon with the National Weather Service. The blaze grew to 156 square miles (404 square kilometers), but crews made gains and it was partially contained, officials said.

People sidestepped metal that melted off cars and Jet-Skis and donned masks as they surveyed ravaged neighborhoods despite an evacuation order for all of Paradise, a town of 27,000 founded in the 1800s. Some cried when they saw nothing was left.

Jan MacGregor, 81, got back to his small two-bedroom home in Paradise with the help of his firefighter grandson. He found his home leveled - a large metal safe and some pipe work from his septic system the only recognizable traces. The safe was punctured with bullet holes from guns inside that went off in the scorching heat.

He has lived in Paradise for nearly 80 years, moving there in 1939 when he said the town had just 3,000 people and was nicknamed Poverty Ridge. The fire was not a complete surprise, he said.

"We knew Paradise was a prime target for forest fire over the years," he said. "We've had 'em come right up to the city limits - oh yeah - but nothing like this," he said.

MacGregor said he probably would not rebuild: "I have nothing here to go back to."

Homes and other buildings in Paradise were still burning, and fire crews were trying to extinguish those blazes, said Scott McLean, a captain with the California Department of Forestry and Fire Protection. Officials warned firefighters to wear their helmets and be careful of falling trees.

Abandoned, charred vehicles cluttered the main thoroughfare, evidence of the panicked evacuation as the wildfire tore through Thursday. The dead were found mostly inside their cars or and outside vehicles and homes.

Five of the dead panicked when they couldn't escape by car because their route was cut off by a wall of fire, said Gabriel Fallon, who rode out the blaze with his parents to care for the horses, cows and livestock on their 10-acre farm in Paradise.

The group turned the other way and dashed down the paved street until it turned into dirt and passed the Fallons' farm, he said. One of the drivers stopped and asked Fallon if the direction they were going would lead them to safety. Fallon said he shook his head as the fire roared closer.

The motorists parked at the end of the road. On Saturday, the charred shells of the five cars remained where they had been parked.

Fallon went back to his property, where he, and his parents and their animals weathered the fire with a garden hose. The fire consumed their home, but left the barn intact.

His mother, Cathy Fallon, said she tries not to think of what she lost when her house burned to the ground. Two of her dogs and nine cats died. She also lost her great-grandmother's mandolin and end table.

"I just can't think about it," she said, beginning to cry. "The thing that hurts the most is that I lost my cats."

Elinor "Jeannie" Williams, 86, was not among the nine victims of the blaze but died as she waited to be airlifted from an evacuated hospital where she was being treated for a head injury.

She was dying, and the family expected to lose her in a few days, said her stepdaughter, Lisa. Still, her death has been hard on her 84-year-old father, Robert, who also may have lost his home, she said.

"He's lost, he's confused, he's trying to hang in there," she said. "It's hitting him hard. Everything is gone, including his wife."

State officials put the total number of people forced from their homes by California's fires at more than 200,000. Evacuation orders included the entire city of Malibu that is home to some of Hollywood's biggest stars .

President Donald Trump issued an emergency declaration providing federal funding for fires on both ends of the state. He later threatened to withhold payments to California, claiming its forest management is "so poor."

Trump tweeted Saturday that "there is no reason for these massive, deadly and costly fires in California." Trump said "billions of dollars are given each year, with so many lives lost, all because of gross mismanagement of the forests. Remedy now, or no more Fed payments!"

California Governor-elect Gavin Newsom responded on Twitter that this was "not a time for partisanship."

"This is a time for coordinating relief and response and lifting those in need up," he said.

Trump took a more empathetic tone later in the day, tweeting sympathies for firefighters, people who have fled their homes and the families of those killed by the flames.

Drought, warmer weather attributed to climate change and home construction deeper into forests have led to more destructive wildfire seasons that have been starting earlier and lasting longer.

California emerged from a five-year drought last year but has had a very dry 2018. Much of the northern two-thirds of the state, including where the fire is burning, is abnormally dry, according to a U.S. government analysis.

Just 100 miles (160 kilometers) north, the Carr Fire near Redding that burned this summer was the sixth-most-destructive wildfire in California history and one of the earliest. It killed eight people in July and August and burned about 1,100 homes.

"The fact is that we are saturated with these kind of fires," safety officer Jack Piccinini told firefighters in Chico.

He warned of "emotional fatigue" among crews from the devastation, death and injuries.