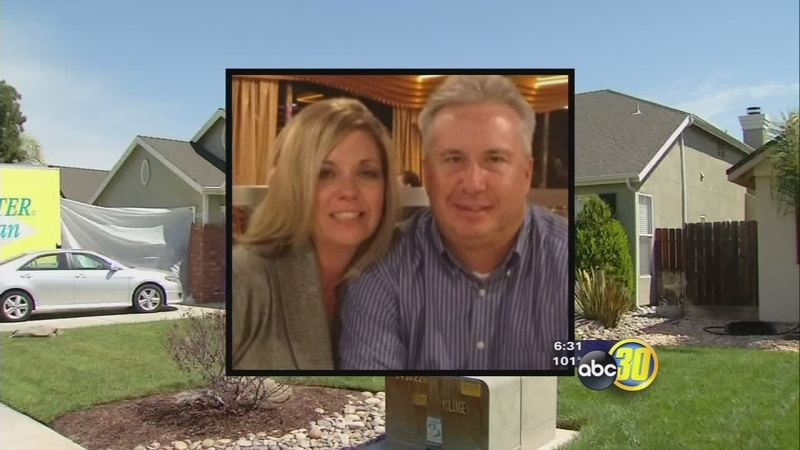 HANFORD, Calif. (KFSN) -- Monday jurors listened to opening statements in the case of Todd Pate, the Hanford man accused of killing his wife Melanie in September 2013. The first witness called was Paul McClain, a man who used to be the boyfriend of the woman who lived next to the Pate family.

The morning of Melanie's death, Paul and his girlfriend were coming home from the lake, when they noticed that the Pate's were having an argument near their garage. That was around 11:15 a.m. When Paul was packing up his car to go home to Las Vegas at around 11:45 a.m., he says he only saw Todd in that garage, with no sign of Melanie.

Paul testified that Todd looked red in the face, and upset.

On Monday, prosecutors posed the question to the jury: Had Todd just killed his wife? Or was he just about to? Regardless of when it happened, Kings County Assistant District Attorney Nick Schuller told the jury Todd was motivated to kill Melanie because of their impending divorce.

Todd had been served with the papers just days before her death, in which Melanie asked for majority custody of their 12-year-old son, Karter.
In the documents, she painted Todd as controlling and manipulative towards Karter.

Upon fully reading the divorce documents, Todd Pate's defense attorney Melina Benninghoff told the jury her client lost it, and was completely out of his mind when he slashed Melanie's throat at their Hanford home.

"(I) can't believe that someone would do something this cruel to a loved one," said Dotti Loee, a Lemoore woman who came to watch the trial.

Loee and her friend Pat Crammer are sitting in on the Pate trial also sat in on the trial of Hanford man Dave Hawk, who was convicted of murdering his wife Debbie.

Both women see parallels between Hawk and Todd, and would like to see justice served again.

"The men have hated their wives, in the long run, and killed them," Crammer said.

"(A) living and breathing person just taken away, it's not right," Loee said.

The prosecution team says Melanie's death was brutal and senseless. They say the defendant knew his marriage was crumbling apart, but he couldn't wait for a divorce hearing and decided to kill his wife instead.