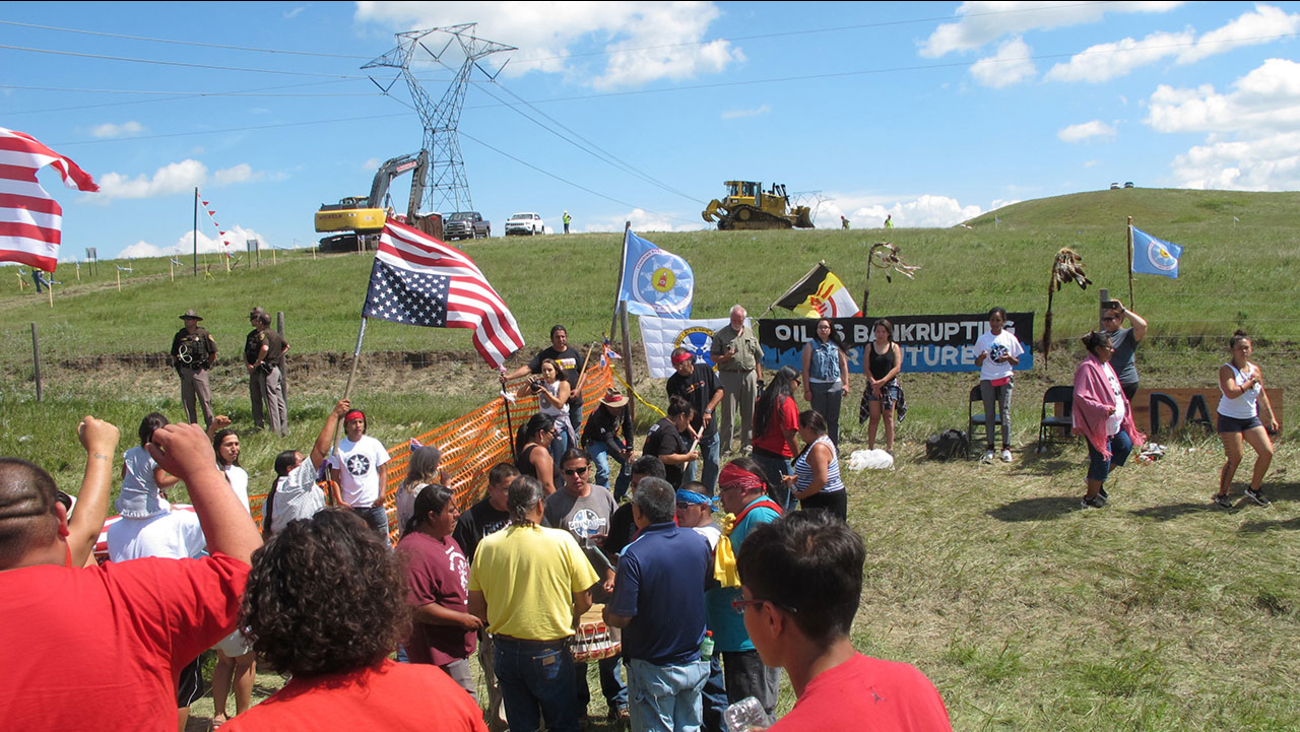 BISMARCK, N.D. -- A federal judge has said he will rule by Friday on the Standing Rock Sioux tribe's lawsuit that challenges federal permits for the four-state, $3.8 billion Dakota Access Pipeline. The lawsuit alleges that the pipeline, which would be placed less than a mile upstream of the tribe's reservation, could impact drinking water for more than 8,000 tribal members and millions who rely on it downstream. Protesters and private security guards have skirmished on private land, where the tribe says construction has disturbed ancient sacred sites. Here's a look at the planned pipeline and the tribe's ongoing protest:

Owned by Dallas-based Energy Transfer Partners, the $3.8 billion, 1,172-mile project would carry nearly a half-million barrels of crude oil daily from North Dakota's oil fields through South Dakota and Iowa to an existing pipeline in Patoka, Illinois, where shippers can access Midwest and Gulf Coast markets. Announced in 2014, supporters said the pipeline would create more markets and reduce truck and oil train traffic - the latter of which has been a growing concern after a spate of fiery derailments of trains carrying North Dakota crude.

The Sioux tribe sued federal regulators for approving the oil pipeline, challenging the U.S. Army Corps of Engineers' decision to grant permits at more than 200 water crossings. Filed on behalf of the tribe by environmental group Earthjustice, the suit says the project violates several federal laws, including the National Historic Preservation Act, and will disturb sacred sites outside of the 2.3-million acre reservation. A separate lawsuit filed Thursday by a South Dakota tribe also challenges the decisions to grant the permits. ETP says the pipeline includes safeguards such as leak detection equipment, and workers monitoring the pipeline remotely in Texas could close block valves on it within three minutes if a breach is detected.

Since April, a nonviolent tribal protest held mostly by members of the Standing Rock Sioux tribe has been set up at a "spirit camp" at the confluence of the Cannonball and Missouri rivers in the path of the pipeline. It's grown considerably, as they've been joined by other American Indians and non-Native Americans from across the country, including celebrities such as "Divergent" actress Shailene Woodley. The protest has become heated, with nearly 40 arrested, including Standing Rock Sioux Tribal Chairman David Archambault II. None of the arrests stemmed from Saturday's confrontation between protesters and construction workers.

Green Party presidential candidate Jill Stein and running mate Ajamu Baraka camped with protesters Monday, and her campaign spokeswoman said Stein spray-painted construction equipment Tuesday. Stein and Baraka have been charged with misdemeanor counts of criminal trespass and criminal mischief. Gov. Jack Dalrymple on Thursday activated the North Dakota National Guard ahead of U.S. District Judge James Boasberg's impending federal ruling. A handful of soldiers will help provide security at traffic checkpoints near the protest site, and another 100 Guard members will be on standby if needed to respond to any incidents.