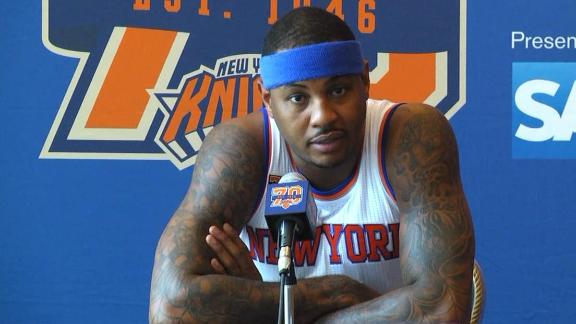 GREENBURGH, N.Y. -- Derrick Rose has a clear understanding of his new role with the New York Knicks.

"My job is to come here and help [Carmelo Anthony] win. This is his team," Rose said on Tuesday after his first training camp practice with the Knicks. "In practice to push him, be on him, when I see that he's being lazy or something like that.

"And it's vice versa, he's going to be on me when he needs to push me. It's no bad blood. I'm just here to help him win."

Anthony's Knicks have missed the playoffs for the past three seasons, struggling through a rebuild.

Team president Phil Jackson sped the rebuild along this summer, putting together a roster that's expected to compete for a playoff spot in the Eastern Conference. The overhaul started with a trade in late June for Rose, who said Tuesday that he hopes to make life easier for Anthony by drawing extra attention from opposing defenses and creating open shots for his new teammate.

"He should have a lot more open shots, knock down shots, and he's a knock-down shooter," Rose said. "My job is to make the game easier for him.

The Knicks also added Joakim Noah, Brandon Jennings and Courtney Lee to a roster that won just 32 games last season. Players have expressed optimism that they can return to the playoffs this season.

The partnership between Rose, who is facing a civil suit alleging sexual assault as well as a criminal investigation, and Anthony is one of several key factors for New York entering the season.

Rose said Tuesday that he and Noah, whom the Knicks signed over the summer to a four-year, $72 million deal, are here to help Anthony win games again.

"We're coming in here, we're battle-tested. Our job is to make his job as easy as possible," Rose said of he and Noah. "That means if it's sacrificing, we're sacrificing. Whatever [Anthony] wants us to do, we're going to do it, bro. We don't want no problems. We just want to win.

"I'm not coming in with any ego problem, and I'm not coming in chasing no stats or anything like that. I don't care about my stats. I don't look at them after games. My job is as long as we win, I can sleep easy at night. That's the only thing I worry about. Just coming here winning. And let the city feel it."

Rose, the 2011 MVP, has struggled to stay on the court in recent seasons. He's played in just 40 percent of his games over the past five seasons because of a variety of injuries, and he's entering the final year of his contract set to make $21.6 million this season.

"I'm more excited for him than I think he is for himself. I love kind of comeback stories," Anthony said. "I love when guys are always counted out, backs up against the wall, and they have an opportunity to go out there and prove themselves.

The civil suit Rose faces is scheduled to go to trial on Oct. 4 in Los Angeles. If Rose attends the trial, he will likely miss preseason games and practices with the Knicks.

Rose has maintained that he's innocent of allegations and said Monday that he hasn't been distracted by the case.

Carmelo 'has never played with a guy' like Rose
Carmelo Anthony talks about what it will be like to play alongside Derrick Rose with the Knicks.
Related topics:
sportsespnnew york knickscarmelo anthonymeloderrick rosenba
Copyright © 2020 ESPN Internet Ventures. All rights reserved.
More Videos
From CNN Newsource affiliates
TOP STORIES