Kevin Durant on Warriors debut: Loss to Spurs 'woke us up a bit' 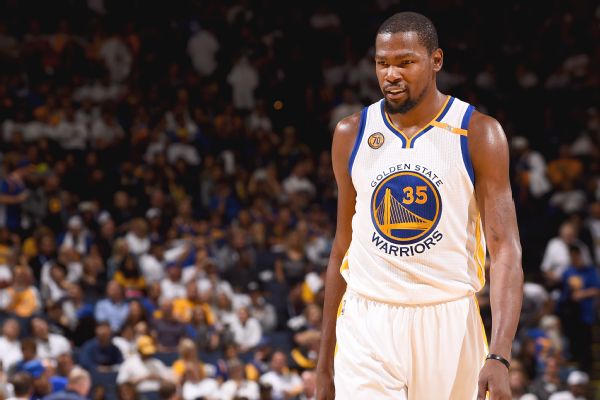 OAKLAND, Calif. -- Kevin Durant came ready to play in his Golden State Warriors debut in front of a sold-out home audience, but his teammates didn't.

Durant went for a team-high 27 points on 10-of-17 shooting in 37 minutes to go with 10 rebounds. He was the lone bright spot for the Warriors, who lost their season opener in blowout fashion to the San Antonio Spurs 129-100 on Tuesday night at Oracle Arena.

"Kevin is so good that he's going to look good in any setting with any group of four around him," said Warriors coach Steve Kerr. "It wasn't about Kevin at all. It wasn't about one particular player; it was about the group."

Durant scored Golden State's first field goal of the season with a fadeaway jumper over the smaller Tony Parker, and that was just the beginning.

Durant was patient from the onset, as he contemplated when to be aggressive. But when he did attack, he couldn't be stopped. He connected on his first four shots, and his fourth was a 3-pointer from the right wing that got the fans up on their feet. Immediately after draining the trey, he slapped the left side of his hip.

He was feeling it, but the same couldn't be said about his supporting cast.

"I'm sure the story tomorrow will be, 'KD broke up the chemistry and we can't win with KD,' and all these other things which is going to come with the territory," Warriors forwardDraymond Green said following the loss. "We're looking forward to that. We already know that's coming."

The Warriors were outperformed in multiple facets of the game, resulting in an 18-point deficit at the half. They struggled to get consecutive defensive stops and were unable to put together a legitimate comeback. Meanwhile, the Spurs just continued to pile on.

"It's a nice little slap in the face," Golden State guardStephen Curry said, after registering 26 points and burying three treys.

Durant agreed, saying, "It's a slap in the face. It woke us up a bit, and we're looking forward to getting better."

The Spurs were the aggressors, killing the Warriors on the glass 55-35 -- including 21-8 on the offensive boards. Second-chance points also went in favor of the Spurs, 26-4. The Spurs' bench outscored Golden State's 54-16, led by Jonathon Simmons, who produced a career-high 20 points.

"We let Simmons come in and destroy us in the first half, and he continued it in the second half. No disrespect to him, but you can't let guys like that come off the bench and get 20," Green explained. "It's hard to win like that. I don't care where you're at."

Aside from Durant and Curry, the rest of the team was 20-for-50 from the floor. Overall, Golden State was 7-of-33 from 3-point range.

"There's a lot of energy in the building. It was a lot before the game," Durant said. "Guys may have been a little tense, but hey, that's NBA basketball."

Green and Klay Thompson missed point-blank layups, and multiple careless passes equated to 16 turnovers. There was a lackadaisical approach all night from the Warriors, and Kerr took full responsibility for it.

"I didn't have them ready to play, obviously," the coach said. "I think the guys were embarrassed tonight. I know I was."

Durant was also active defensively, swatting away two shot attempts at the rim. Spurs forward David Lee was on the receiving end of one of those blocks in the first quarter. He had Durant in the post and tried to shoot over him, but Durant sent his shot into the front-row seats.

The crowd erupted with cheers, and Durant let Lee hear about it with a little trash talk. If the one-time MVP was nervous prior to tipoff, it didn't show. The excitement level was enormous from the onset, but it quickly subsided as the game went along. Golden State failed to sustain any sort of momentum, and it cost the team on national television.

The Warriors won an NBA-record 73 games last season. Adding a superstar talent such as Durant only intensifies expectations. The Warriors have stressed that they're up for this mammoth task.

And although Durant played well on Tuesday, from here on out, eyes will be fixated on his presence to see if he's more of a hindrance or a positive addition.

"[Durant's] adjusted well," Curry said. "Our offense wasn't really an issue tonight, I don't think. We have to shore up the other end."