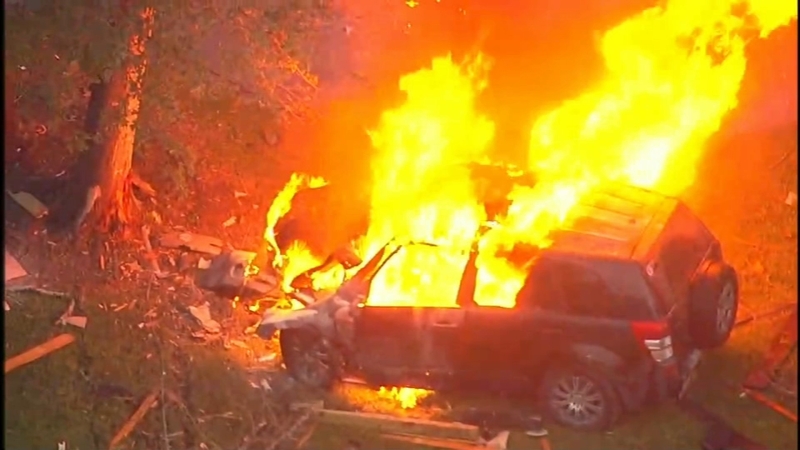 HOUSTON, Texas -- A 16-year-old boy out on a joyride in his mom's SUV crashed into the backyard of a west Houston home, causing the SUV to burst into flames, authorities say.

Police say they were trying to pull over the vehicle when they spotted it going 80 miles per hour on the Southwest Freeway between Chimney Rock and Westpark.

Police followed him onto the Westpark Tollway, where he exited at Fondren.

Officials say the boy didn't follow the curve at S. Piney Point, and that's where he lost control and launched into a woman's backyard.

"Hit the curve over here and flew right into that fence," Robert Canales said.

He was on his way to work when he witnessed the crash at Fondren and S. Piney Point.

He slammed into a tree and a gas line, stopping feet from the pool.

After helping the officer, who also crashed, get out of his car, Canales said they ran to the SUV as it erupted in flames.

"And so me and the officer got him out, I held him on the ground, the officer handcuffed him," Canales said.

SkyEye was over the backyard, where flames were shooting from the vehicle. Debris from the crash was scattered all over the yard.

SUV on fire outside of home in west Houston after crashing through backyard.

After saving the teen driver, Canales says he went to the home and alerted the woman who lived inside.

"After we got her safe, I went over to the next door neighbor's and got them out of the house."

The 16-year-old was taken to the hospital as a precaution.

He will be charged with felony evading.

Police say the people who live in the house were not home. They have been contacted about the crash.

The officer following him did make the curve, but hit a yellow street sign, cracking his windshield.

The officer is okay.