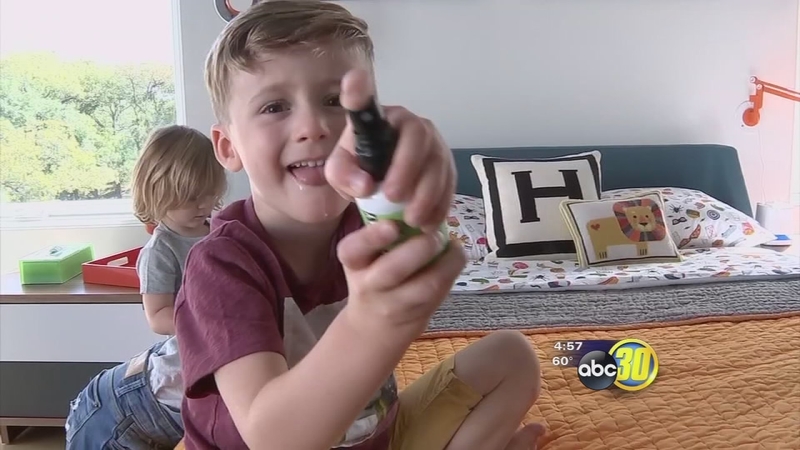 FRESNO, Calif. (KFSN) -- When their young children get a little too naughty two moms in Texas grab their liquid discipline of their own invention-- Sassy Spray.

"I was needing something personally that wasn't as harsh as spanking but a little harsher than time out," said Candice Romo, Hawke+Sloane Co-Creator.

Romo, the co-creator of Hawke and Sloane who is also the wife of NFL quarterback Tony Romo, and her best friend and business partner Hollie Siglin created Sassy Spray hoping to find their own solution to bad behavior.

The spray is a mix of apple, vinegar, and vegetables.

The moms say whipping out the spray helps keep their kids in line. We spoke to families in Fresno who say Sassy Spray would not be the first thing they reach for when it comes to disciplining their kids.

"I think it might be an alternative if nothing else worked but I think I would try other things first before I would spray something in my child's mouth like that," said Shana Blankenship, parent.

"I'd have to do some more research to make sure it's something that wasn't harmful or a punishment. I'd rather something they discipline, they learned from and they were learning correct behavior as well as not to do it again and why," said Mario Hernandez, parent.

"I would rather be sent to my room and have something taken away because that would definitely get through my head," said Spencer Dilbeck, Fresno.

Action News spoke to several child psychologists who say though Sassy Spray seems like a modern-day "soap in the mouth" disciplinary tool, anything that would humiliate a child like that could be harmful and is not recommended.

"This is a method that we found useful for us and we know we're going to get criticism for us, and that's okay because it works for us and it doesn't have to be for everybody," said Romo.