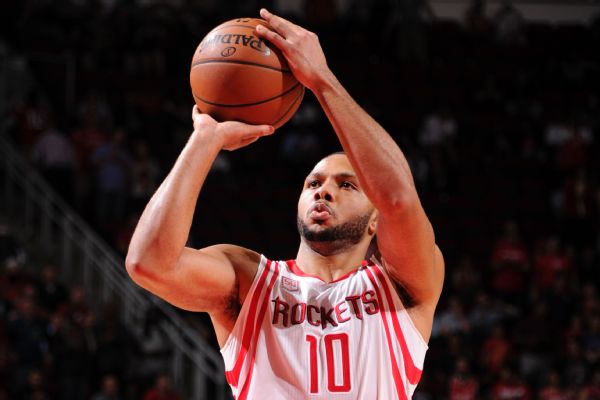 HOUSTON -- The Rockets set a trio of NBA 3-point records in a 122-100 win over the New Orleans Pelicans on Friday night.

"We're just trying to take the right shots in the sense of either a 3 or a layup," coach Mike D'Antoni said. "Something has got to be there. A team has to choose. I really feel like we don't force many."

The Rockets had previously set the record for the most 3-point attempts in a game with 50 on Nov. 25 at Sacramento, beating the previous mark of 49 set by Dallas in 1996.

Houston now has attempted 40-plus 3-pointers in four of its past five games and 12 times overall this season.

That ties the NBA record for most games with 40-plus 3-point attempts in a single season, which the Rockets set last season.

Of the 10 Rockets who played, six attempted at least one 3-pointer, including backup center Montrezl Harrell.

Rockets guard Eric Gordon, who led the team with seven made 3-pointers, said he thinks the 61 total 3-pointers might be broken.

"We can still be better," said Gordon, who has hit at least three 3-point field goals in each of the past 12 games, tied for the fourth-longest streak in league history. "I wouldn't doubt before the season is over we would break that record again. I think it will happen for sure this season. A lot of teams like to load up and not let us get layups, and it forces us to shoot 3s. Why not? We might have that chance again."

Rockets drain an NBA record 24 3-pointers
Check out all 24 of the Rockets 3-pointers, setting the mark for most threes in an NBA game.