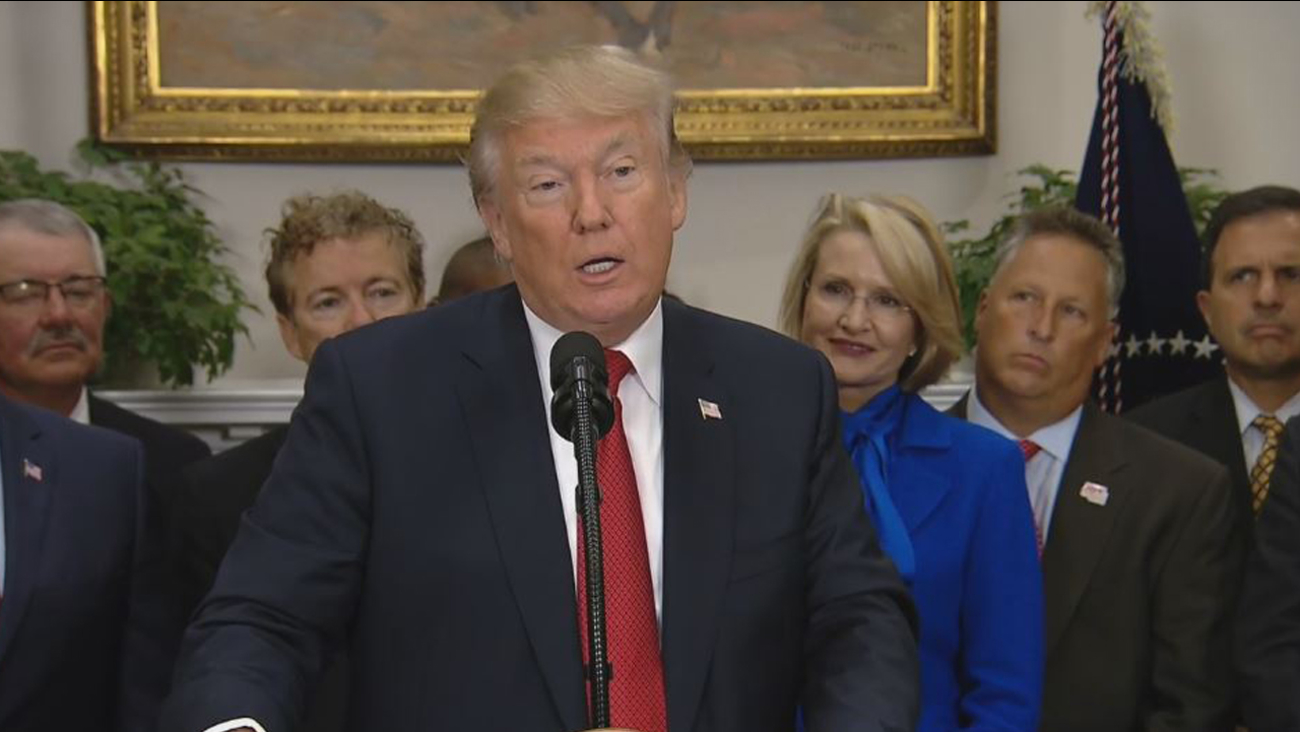 WASHINGTON -- Frustrated by failures in Congress, President Donald Trump is moving to put his own stamp on health care with an executive order Thursday that aims to make lower-premium plans more widely available.

But the changes Trump hopes to bring about could take months or even longer, according to administration officials who outlined the order for reporters Thursday morning. The proposals may not be finalized in time to affect coverage for 2019, let alone next year.

Why it would take so long: The proposals have to go through the federal government's rule-making process, which involves public notice and comment, and that can take time.

Administration officials one of the main ideas is to ease the way for groups and associations of employers to sponsor coverage that can be marketed across the land. That reflects Trump's longstanding belief that interstate competition will lead to lower premiums for consumers who buy their own health insurance policies, as well as for small businesses.

Those "association health plans" could be shielded from some state and federal insurance requirements. But responding to concerns, the White House said participating employers could not exclude any workers from the plan, or charge more to those in poor health.

Other elements of the White House proposal include:

-Easing current restrictions on short-term policies that last less than a year, an option for people making a life transition, from recent college graduates to early retirees. Those policies are not subject to current federal and state rules that require standard benefits and other consumer protections.

-Allowing employers to set aside pre-tax dollars so workers can use the money to buy an individual health policy.

"This executive order is the start of a long process as the gears of the federal bureaucracy churn, not the final word," said Larry Levitt of the nonpartisan Kaiser Family Foundation.

It's also unlikely to reverse the trend of insurers exiting state markets. About half of U.S. counties will have only one "Obamacare" insurer next year, although it appears that no counties will be left without a carrier as was initially feared. White House officials said over time, the policies flowing from the president's order will give consumers more options.

Democrats are bracing for another effort by Trump to dismantle "Obamacare," this time with the rule-making powers of the executive branch. Staffers at the departments of Health and Human Services, Labor and Treasury have been working on the options since shortly after the president took office.

The president's move is also likely to encounter opposition from medical associations, consumer groups and perhaps even some insurers - the same coalition that so far has blocked congressional Republicans from repealing Obama's Affordable Care Act.

State attorneys general and state insurance regulators may try to block the administration in court, seeing the plan as a challenge to their traditional oversight authority.

As Trump himself once said, health care is complicated and working his will won't be as easy as signing a presidential order.

Experts say the executive order probably won't have much impact on premiums for 2018, which are expected to be sharply higher in many states for people buying their own policies.

Sponsors would have to be found to offer and market the new style association plans, and insurers would have to step up to design and administer them. For insurers, this would come at a time when much of the industry seems to have embraced the consumer protections required by the Obama health law.

Depending on the scope of regulations that flow from Trump's order, some experts say the alternatives the White House is promoting could draw healthy people away from "Obamacare" insurance markets, making them less viable for consumers and insurers alike

But conservatives such as Sen. Rand Paul, R-Ky., believe the federal government has overstepped its bounds in regulating the private health insurance market. They argue that loosening federal rules would allow insurers to design plans that - although they may not cover as much - work perfectly well for many people.

About 17 million people buying individual health insurance policies are the main focus of Trump's order. Nearly 9 million of those consumers receive tax credits under the Obama law and are protected from higher premiums.

But those who get no subsidies are exposed to the full brunt of cost increases that could reach well into the double digits in many states next year. Many in this latter group are solid middle-class, including self-employed business people and early retirees. Cutting their premiums has been a longstanding political promise for Republicans.
Report a correction or typo
Related topics:
politicsdonald trumpobamacarehealth careu.s. & worldpresident donald trump
Copyright © 2020 by The Associated Press. All Rights Reserved.
U.S. & WORLD