KFSN
By Cory James
FRESNO, Calif. (KFSN) -- After spending four days in neighborhoods destroyed by the raging wildfires burning in Northern California, two Merced firefighters were among a strike team that made a shocking discovery.

"As we patrolled our assigned area firefighter Garing, noticed an American flag still on a pole that had been knocked overlaying in a tree that had burned up," said Ryan Paskin.

The flag survived the inferno-- so without hesitation, they did what they knew they had to do.

"We felt obligated to pick it up and straighten the flag mount it secure it," said Paskin.

A moment providing strength to those impacted by the devastating loss.

"It was actually a really positive sign for us our crew a real positive message that there is hope for these guys."

Merced Fire Chief Mike Wilkinson says he is proud of his firefighters for doing what they did.

"It was awesome they were showing the patriotism to our country and in respect to all those people who have lost their home," said Wilkinson.

Max Whitley is appreciative of them too. He moved to Merced from Santa Rosa this past Friday and watched the tragedy unfold.

I was out, standing watching it burn at 2 a.m. and it was pretty horrific," said Whitley.

However, this he says will serve as a token of inspiration as people in various communities rebuild.

"It brings people together having a little bit of nationalism which always helps out the whole country and the firefighters did a great job out there," said Paskin.
Report a correction or typo
Related topics:
societynorthern californiawildfirenorthern californiaamerican flag
Copyright © 2020 KFSN-TV. All Rights Reserved.
AMERICAN FLAG
VIDEO: FedEx driver sees downed American flag, stops to properly fold it Car dealership giving away Bible and gun with car purchase 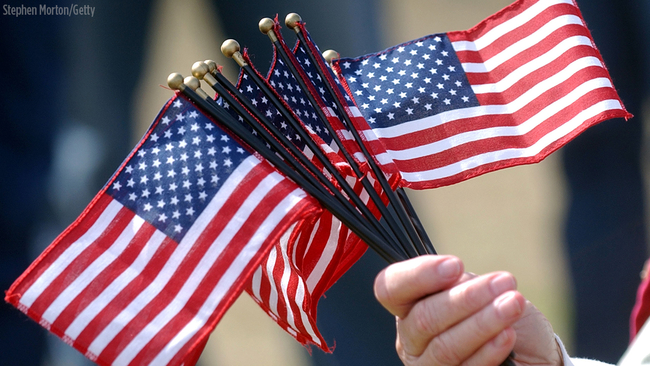