AP
By MICHAEL BALSAMO and JEFF MARTIN
WASHINGTON -- Three men linked to a violent white supremacist group known as The Base were charged with conspiring to kill members of a militant anti-fascist group, police in Georgia announced Friday, a day after three other members were arrested on federal charges in Maryland and Delaware.

The Base, a collective of hardcore neo-Nazis that operate as a paramilitary organization, has proclaimed war against minority communities within the United States and abroad, the FBI has said. Unlike other extremist groups, it's not focused on promulgating propaganda - instead, the group aims to bring together highly skilled members to train them for acts of violence.

Its organizers recruit fellow white supremacists online - particularly seeking out veterans because of their military training - use encrypted chat rooms and train members in military-style camps in the woods, according to experts who track extremist groups.

The group, which has the motto "learn, train, fight," brings together white supremacists with varying ideologies.

The arrests show an intensified focus on the group from law enforcement officials who are concerned that the supremacists may go beyond plotting to violent acts, a threat made more urgent ahead of a pro-gun rally Monday in Richmond, Va. It was unknown if the men in Georgia had any plans to attend the rally.

There's an intensified focus on The Base after three members were arrested Thursday in Maryland and Delaware on federal felony charges. A criminal complaint included details of how some of the men built an assault rifle using parts, purchased thousands of rounds of ammunition and traded vests that could carry body armor. They were believed to be planning to attend the pro-gun rally in Richmond, according to a law enforcement official who spoke to The Associated Press on condition of anonymity to discuss an active investigation.

The arrests only added to rising fears that Monday's rally could quickly devolve into violence, with thousands of protesters planning to descend on Virginia's capital, and become a repeat of the 2017 white nationalist rally when a man drove his car into counter-protesters in Charlottesville, killing Heather Heyer, a 32-year-old paralegal and civil rights activist.

"These extremists are going to try to attach themselves to these events in order to exploit these strong feelings, to try to bring in new recruits," said Oren Segal, vice president of the Anti-Defamation League's Center on Extremism.

In encrypted chat rooms, members of The Base have discussed committing acts of violence against blacks and Jews, ways to make improvised explosive devices and their desire to create a white "ethno-state," the FBI has said in court papers.

On Friday, police in Georgia confirmed that three other men linked to The Base were arrested on charges of conspiracy to commit murder and participating in a criminal street gang. Authorities said the men planned to kill a married couple who were anti-fascist protesters - part of the Antifa movement - and believed killing the couple would send a message to enemies of The Base.

The arrests came after an undercover FBI agent infiltrated the group and participated in shooting drills in the mountains of northern Georgia, according to a police affidavit obtained by the AP. The drills were being done in preparation for what they believe is an impending collapse of the United States and ensuing race war. At the end of the firearms training, the Georgia men wore tactical gear and balaclava hoods that expose only part of the face while posing for photos with the undercover agent and the photos were later used in the group's propaganda, the affidavit says.

The men were identified as Luke Austin Lane, Michael Helterbrand, and Jacob Kaderli. The three remained in custody and it was not immediately clear whether they had attorneys who could comment on the allegations. 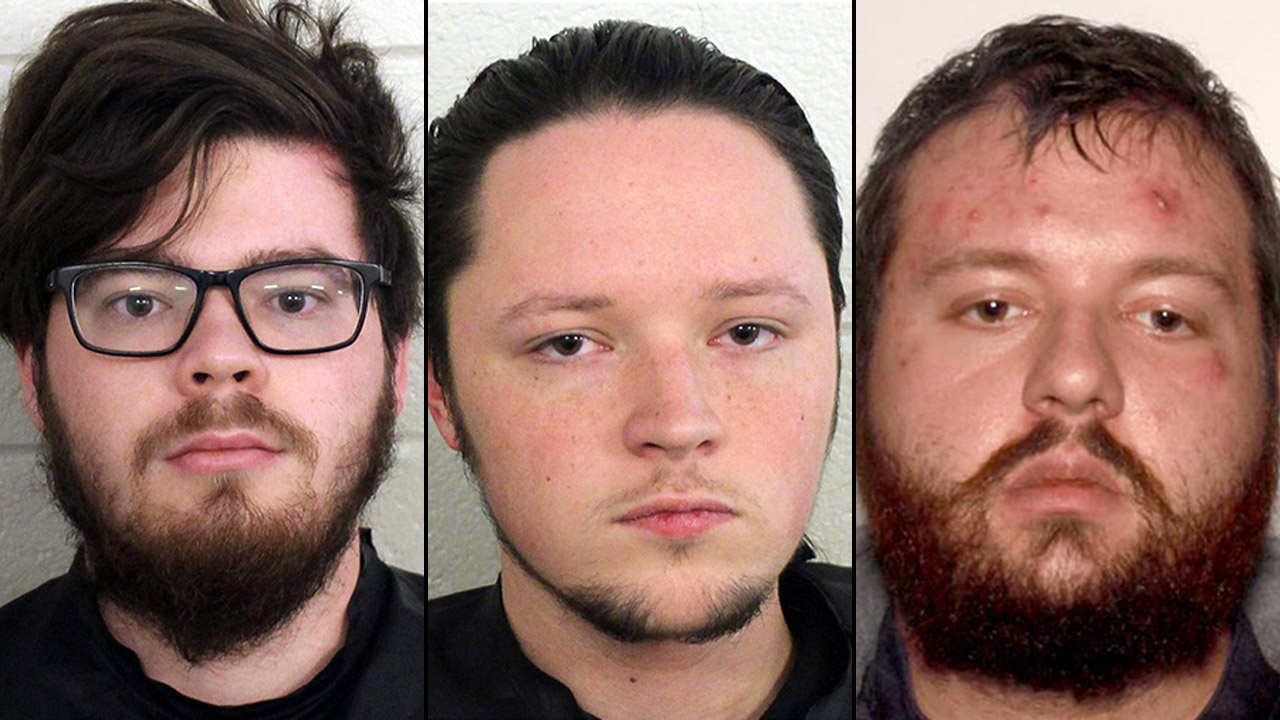 Lane, Kaderli and the undercover agent drove to the couple's home in Bartow County to scope it out, according to the affidavit. After checking out the property and the surrounding neighborhood, Lane suggested using a sledgehammer as one way of breaching the door, then kill them with revolvers, according to the affidavit. Kaderli suggested they should burn the house down after the killings, it states.

While other extremist groups are focused on getting people together to produce propaganda and make a name for themselves around a specific ideology, The Base is focused on action, the experts say. They are interested in training their members to use firearms and explosives.

"To have that kind of broad tent, that's incredibly dangerous," said Joshua Fisher-Birch, a researcher with the Counter Extremism Project, a policy group formed to combat online extremist ideologies.

Members of The Base also believe in an extreme form of survivalism and preparation, offering real-life survivalist training to resist the "extinction" of the Caucasian race, the FBI has said.

"I think what marks The Base as a particular concern is that it is very blatant about its embrace of accelerationist ideas. This concept that societal collapse is not only imminent, but that they have a role to play in furthering it - so that we can have a race war in this country," Segal said.

"There are many groups active online that have an on-the-ground presence, but it's the sub-culture that the base is embracing is so vividly militant," he said. "It's so blatantly hateful it's going to attract a certain type of extremist, one who is looking for action."

A New Jersey man who authorities say was a recruiter for The Base was arrested by the FBI in November after he allegedly used the group to find fellow neo-Nazis to vandalize synagogues in Michigan and Wisconsin. Authorities said the group's plan to vandalize synagogues with anti-Semitic graffiti and break windows was part of what the group called "Operation Kristallnacht," a reference to a 1938 incident when Nazis torched synagogues in Germany, vandalized Jewish homes and business and killed close to 100 people.

The man, Richard Tobin, 18, had also discussed carrying out a suicide bombing and said he had saved manuals about how to carry out an attack, filling the back of a truck with barrels packed with explosive materials similar to the Oklahoma City bombing that killed 168 people in 1995.

Separately on Friday, the Justice Department charged a Wisconsin man who they say was also a member of The Base who spray painted swastikas, the group's symbol and anti-Semitic words on a synagogue in Racine, Wisconsin in September, at Tobin's direction. The man, Yousef Barasneh, 22, was arrested on a federal civil rights charge.

Tobin is not named specifically named in the charging papers against Barasneh, but the details match those in the criminal complaint that was filed against him in November. Authorities said Tobin and Barasneh were supposed to meet in person at one of the group's meetups in in Silver Creek, Georgia, from Oct. 30 until Nov. 2. Tobin ultimately didn't attend.

Prosecutors said recruitment posters for The Base were put up at Marquette University in Milwaukee and the group also held a separate training session for members in Wood County, Wisconsin.
Report a correction or typo
Related topics:
washington d.c.nazisgun violencegun lawsu.s. & worldrally
Copyright © 2020 by The Associated Press. All Rights Reserved.
More Videos
From CNN Newsource affiliates
TOP STORIES