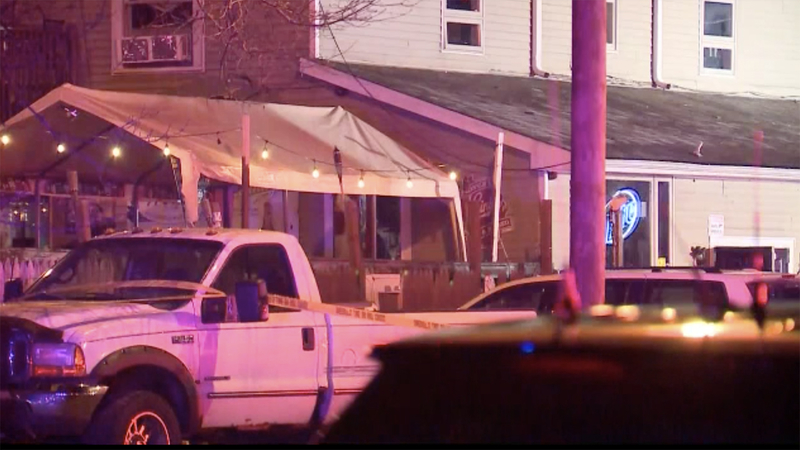 KENOSHA, Wis. -- A person of interest is now in custody in connection to a mass shooting at a Kenosha County, Wisconsin bar early Sunday that left three men dead and at least three others injured, according to police.

The shooting took place around 12:42 a.m. at the Somers House bar. On Sunday, the popular bar was surrounded in crime tape as officials continued to investigate.

Three of the victims have been hospitalized with gunshot wounds, and police said there could be at least one other possible unknown shooting victim.

"There's a possibility that one or two, or maybe even more had, minor injuries, some other injuries," said Sheriff David Beth, Kenosha County Sheriff's Department.

As of 4 p.m. Sunday, Kenosha officials said "a person of interest has been located and will be criminally charged with (1) count of 1st-degree intentional homicide with additional criminal charges to follow pending further investigation." They also said there is no threat to the community at this time.

Two people died at the scene. The third fled in a car with other people but later died on the way to a hospital.

"At first, there was a fight that broke out between two individuals right next to the bar," said Heidi Wittwer, who was at the bar at the time of the shooting.

The sheriff said the person responsible may have been told to leave the bar, and then returned to go on the shooting spree.

"One person got removed from the establishment and possibly came back a short time later," said Sheriff Beth.

Wittwer said the bar was packed with dozens of people when the first round of shots were fired.

"We were told to duck, and then everyone started running and we all just ran very fast," Wittwer said.

Peter Ploskee woke up to the sound of gunshots near his home.

"Next thing you know, I hear a bunch of shots going off. I got up, ran out and looked out the window. Just see people running from the bar in every direction," he said.

The shooter, who is described as a six foot tall man wearing a light-colored hooded sweatshirt, is still on the loose, according to Kenosha officials.

"I didn't see nobody. Like I said, when I looked out the window, it was just chaos. People running every direction possible, so you know, who's who? Is that the guy? Is this the guy? People are just running, people screaming," Ploskee said.

Kenosha officials believe the incident was targeted and that the shooter may have known the injured people.

Wisconsin Gov. Tony Evers released a statement regarding the shooting.

"My heart breaks for Kenosha this morning in the wake of a shooting that took three lives and injured at least two others. I want to thank the first responders who reacted quickly and are still working to investigate and find those involved in this senseless tragedy. Kathy and I join Wisconsinites in hoping and praying those injured will recover from their injuries. We are thinking of the families and loved ones affected and the entire Kenosha community as they grieve and grapple with yet another tragic incident of gun violence."

The Johnson & Johnson vaccine pause shouldn't stop people from getting vaccinated, one doctor says. Dr. Sampson Davis points out so much ground has been made when it comes to overcoming vaccine hesitancy, particularly in communities of color.

Officials said they are looking for possibly multiple people and multiple weapons. No guns were recovered at the scene, but did mention that a handgun or handguns could have been used, according to the sheriff.

The bar is known as gathering place for the Carthage College community. The campus was on lockdown for a period of time Sunday morning, according to the college website, but the college received a message at 6:20 a.m. from law enforcement that said the lockdown can be lifted.
Report a correction or typo
Related topics:
wisconsinbarfatal shootingu.s. & worldabc newsnational
Copyright © 2021 ABC News Internet Ventures.
More Videos
From CNN Newsource affiliates
TOP STORIES