Kings owner tells crowd after Sacramento protests: 'We are all united in our commitment' 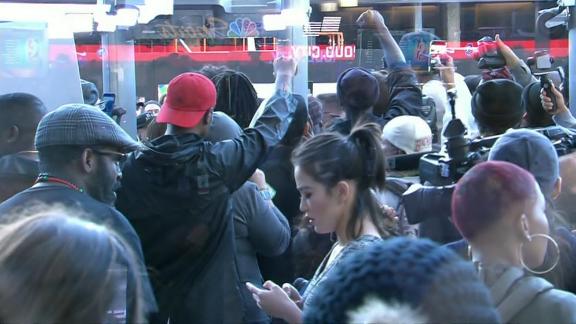 Sacramento Kings owner Vivek Ranadive addressed a small crowd inside Golden1 Center after the team's delayed game Thursday against the Atlanta Hawks, as protests took place around Sacramento in the wake of the weekend police shooting of an unarmed black man.

Protesters holding signs with messages such as "Shut it down" converged arm-in-arm outside the Kings' home arena before the game to demonstrate Sunday's fatal shooting of 22-year-old Stephon Clark.

Ranadive, surrounded by Kings players on the court, expressed sympathies to Clark's family and recognized the franchise's role as a community leader.

"We are so very sorry for your loss,'' Ranadive said. "We at the Kings recognize people's abilities to protest peacefully, and we respect that. We here at the Kings realize that we have a big platform. It's a privilege, but it's also a responsibility. It's a responsibility that we take very seriously, and we stand here before you, old, young, black, white, brown, and we are all united in our commitment.

The protest outside of the Golden1 Center delayed the game for about 20 minutes. Dozens of police attempted to clear entrances, where protesters formed a human chain blocking fans trying to attend the game and surrounded main entrances to the arena, before spectators eventually began to trickle in. There was shouting but no apparent violence as frustrated fans waited outside.

An estimated crowd of fewer than 2,000 made it into the 17,600-seat Golden1 Center before police decided to not allow anyone else to enter. Several of those who did get in were allowed to move down into the lower bowl of the arena, leaving the upper deck empty.

There was also talk of canceling or postponing the game, before the NBA made the decision to play.

"Basketball was secondary tonight," Hawks coach Mike Budenholzer said. "The league obviously made the decision that I think was in the best interest of the safety of the fans that were already in the arena. I think it was the right decision by the league but certainly not an easy one.''

Sacramento'sVince Cartersaid players from both teams talked to one another about the situation throughout the game. An eight-time All-Star, Carter praised Ranadive's postgame comments.

"What Vivek said speaks volumes,'' Carter said. "Regardless of your skin color, it's just what's right and what's wrong and how we can support each other, even if it has nothing to do with you. Lend a hand and support. That's the message that needs to shine through all of this."

Added Kings forwardGarrett Temple: "I think the protest did what it was supposed to do. It brought light to what's going on. I think that's what protests are for. And after that, something has to change."

The Kings later issued a statement regarding potential refunds for those fans who were unable to get inside.

"Tonight's game began with a delay," the team said in the statement. "Due to law enforcement being unable to ensure ticketed fans could safely enter the arena, the arena remains closed, and we ask fans outside to travel home. We will issue further information soon regarding a refund.''

The protesters earlier marched from Sacramento City Hall and onto a nearby freeway, disrupting rush-hour traffic and holding signs with messages such as "Sac PD: Stop killing us!''

In speaking about the protesters blocking the entrances, Kings season-ticket holder Barbara Mitchell, who is black, told the Sacramento Bee she was "appalled by what happened to the young man. It was a travesty. So as much as I love basketball, it's OK. I'm not angry. I admire them for taking the time to protest an injustice.''

Clark was shot Sunday. Police say they feared he had a handgun when they confronted him after reports that a man had been breaking windows. But police found only a cellphone.

Kings-Hawks delayed due to protest
Before the start of the game, individuals gathered outside of Golden 1 Center in a statement of protest.