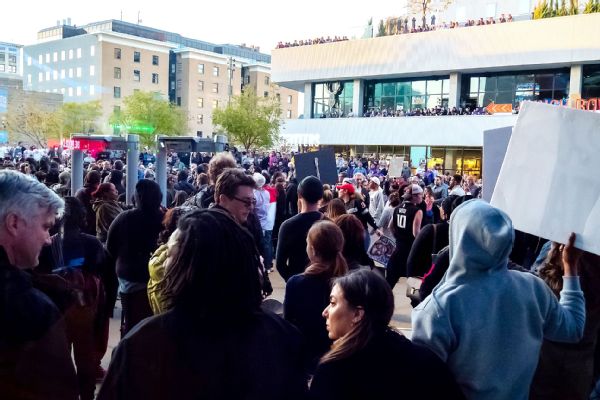 ESPN
Tuesday night's game between the Kings and theDallas Mavericks tipped off just a few minutes behind schedule, even though entrances to Sacramento's Golden 1 Center were temporarily closed when protesters descended onto the arena for the second time in less than a week.

Hundreds of protesters blocked the entrances to the arena ahead of the 10 p.m. ET tipoff in response to the March 18 fatal police shooting of Stephon Clark, an unarmed 22-year-old black man who was killed in his grandparents' backyard in Sacramento. Most fans were prevented from entering Golden 1 Center, and the Kings later released a statement saying refunds would be given.

"Tonight's demonstrations beginning at City Hall migrated to Golden 1 Center, preventing ticketed guests from safely entering the arena," the Kings said in a statement. "The safety of our guests is our number one priority. Due to law enforcement being unable to allow ticketed fans to safely enter the arena, the doors were closed to maintain guest and public safety.

"We continue to work with law enforcement and City leadership to ensure the safety and security of fans and the public on Thursday and at future events."

Some fans who arrived to the game early were let in and permitted to move down into the lower bowl of the arena. Although no official attendance was given, the crowd was estimated at around 4,000.

That was twice the number of people who were allowed in for the Kings game on Thursday, when protesters formed a human chain around the arena and forced the start of the contest to be delayed.

Mavericks forward Harrison Barnes expressed support for the protesters, saying he's hopeful they will stir debate that he believes is long overdue, not just in Sacramento but around the country.

"If they were doing this somewhere else in the city, would they still be garnering the same attention?" Barnes asked following the Mavericks' 103-97 victory over the Kings. "Would it be at the front of every opposing team that's coming in here? Would it be national news that the Sacramento Kings are locking fans out of their stadium? Why are they locking fans out of the stadium? Oh, because this young man was killed. Then the dialogue keeps going that way.

"There's never an easy way that's easy for everyone who's involved to accept it and be on board, but the point is to bring attention to something, to start a debate, and that's what they're doing."

"Hopefully [the protests] keep the discussion going in all sorts of communities, not only here," Nowitzki said. "It's just unfortunate that things like this continue to happen. Communities need all the help they can get."

Clark was killed by two Sacramento police officers who were responding to a report of someone breaking car windows in a South Sacramento neighborhood. Police thought Clark was holding a gun, but he was found only with a cellphone. Protests have taken place throughout the city since.

On Thursday, the game between the Kings and theAtlanta Hawks started after a 19-minute delay because of the protesters, who were locked arm in arm surrounding entrances to the Golden 1 Center.