KFSN
MERCED, Calif. (KFSN) -- It is not the dangers behind the badge that has Detective Joe Henderson fighting for his life. It is an inner battle--one he is prepared to win again.

"I could just be like well like this world is completely unfair, why did I get this? And be upset, pessimistic, and stressed out. And I probably would have been gone quite a while ago," said Detective Joe Henderson.

Detective Henderson is talking about his fight against brain cancer. He was first diagnosed in 2009.

Surgery removed most of the tumor. Last year, the cancer came back and is quickly spreading.

"Just recently I found out that the chemo is unfortunately not working, but I still have optimism that there will be another type of chemo," said Henderson.

Then and now, the community has come together and people organized benefit concerts and made t-shirts. The Merced Police Department even sent him to Boston.

Next Sunday, three local businesses are coming together to throw a drive-thru dinner to raise money for his family.

"The support that the community gives me, it makes me know that I am not a bad guy, that people like me, a little bit," said Henderson.

The stage four cancer has not kept Henderson away from his job.

He has been with the Merced Police Department for 13 years, serving the people of his city. He is seeing the impact he has left behind.

"The way I treat these individuals, I treat them like family like friends, not just people that come in and I process them," said Henderson.

Next month, Henderson will return for more chemotherapy treatments. The community will be rooting for his recovery. To Henderson, stage four is but a number.
Report a correction or typo
Related topics:
health & fitnessmercedhealthmercedcancer
Copyright © 2020 KFSN-TV. All Rights Reserved.
CANCER

Mom who survived leukemia battle and gave birth to twins has died
Bayer to pay up to $10.9 billion to settle Monsanto case 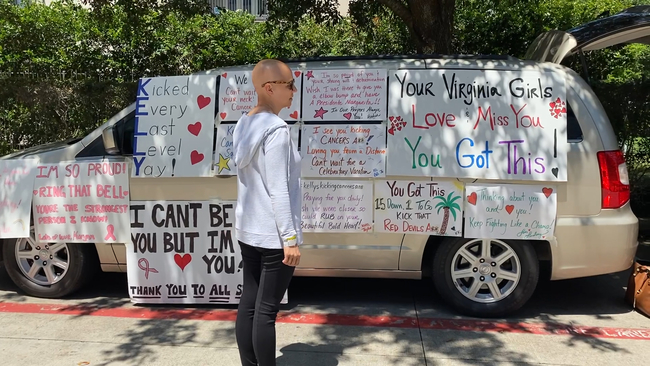