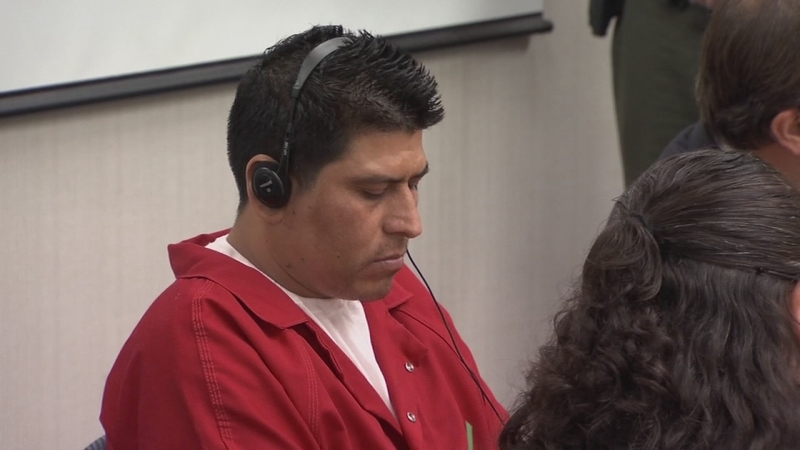 FRESNO, Calif. (KFSN) -- Closure won't come easily, but Tuesday was a start for a family left incomplete by a jealous man who used a car as a weapon to kill his romantic rival.

Saul Mendoza is on his way to prison, two years after he killed Sigifredo Gomez.

Gomez's family wants to forgive and move on, but one detail keeps sticking in their minds. Mendoza spotted an ex-girlfriend with Gomez at a taco stand and chased him down some country roads before running him over. Then, he drove away to go gamble at Tachi Palace.

Saul Mendoza ran over and killed a romantic rival in 2016.
In a letter to the judge he apologizes to Sigifredo Gomez’s family and says he was on drugs at the time, might’ve stopped to help if he wasn’t.
Prior @abc30 story:https://t.co/9XYU8GESPx pic.twitter.com/ME9anzLvLG

Maria Torres walked past the flares and flashing lights and found her brother's lifeless body lying on the street under a white tarp.

The anger at the man who left him there has faded a little over the last two years, but she made sure he knew the sting of her family's sadness.

"You and the decisions you made that July night left us with a broken and confused heart," she said. "We struggle with the thought that you left our beloved Sigifredo lying on the road as roadkill."

Now Maria is reading a letter from Sigifredo’s daughter.
She says she couldn’t talk for 3-4 days and pulled out her hair thinking she was going insane. pic.twitter.com/I2zc8lOUZN

Prosecutors say Mendoza and Gomez already had a beef and Mendoza had threatened violence before, so it was pretty clear he meant to kill Gomez when he ran him down.

Mendoza barely spoke as a judge sentenced him to prison Tuesday, but he wrote a letter to the judge and the victim's family.

"If I had not been using drugs that day, things would not have happened the way they happened, and perhaps I would have stopped the car to help him," he wrote in a letter Judge Alvin Harrell II read aloud in court. "I hope the family is able to one day forgive me. I am very sorry."

Forgiveness is easier said than done for Gomez's family.

They talked about the hole they're left to fill -- the empty chair at holidays and special occasions, the two daughters whose father can't walk them down the aisle, and the four sons who will never have a man-to-man conversation with their dad.

His mother was too heartbroken to even come say her piece, but in a letter of her own, she remembered washing her son's clothes and making one of his favorite meals that night.

"Until this day, I think of that meal and how it sat on my stove," Maria Torres read from her mother's letter. "Even more painful was putting all of that clean laundry away for good."

Prosecutors reduced the initial murder charges to manslaughter because of a couple of potential issues: a heat of passion defense and inconsistent stories from the only witness.