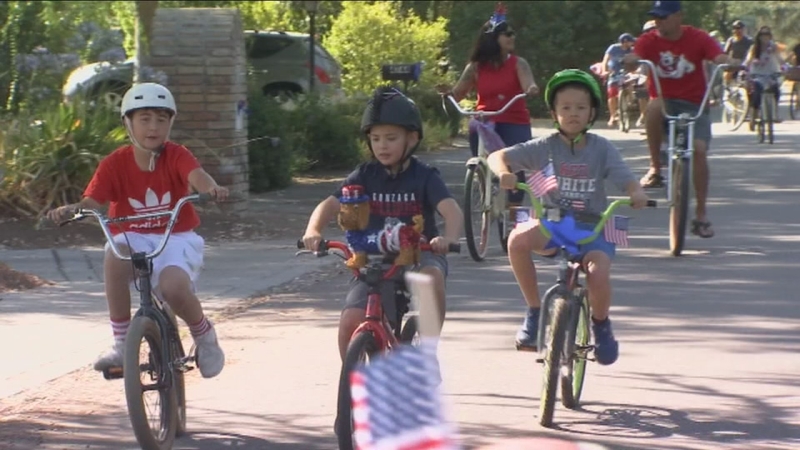 "I'm glad everybody is excited to support the community of Old Fig Garden and to support Nick Kauls," said organizer Deanna Hoffman.

The shooting death of Nick Kauls is the first murder in Old Fig in 83 years, and several people who live there tell Action News they are in mourning, right along with the 17-year-old's family.

But on the Fourth, they took a big step towards regaining their sense of safety as their second annual parade and street festival doubled as a fundraiser.

"Wassup Fourth of July," shouted a kid near the start of the parade. "Merry Christmas."

A little holiday comedy worked its way into the Independence Day celebration on the streets of Old Fig.

Kids led the way on their bikes as scooters, carts, dogs and even tricycles followed a parade through the neighborhood.

"I think this really is a tribute to how strong our community is," Hoffman said. "And how we want to continue with our old-fashioned style of life and how we all just feel like a family in Old Fig Garden."

Eight-year-old Vivian and 11-year-old Maddie showed us how they spruced up their bikes with the red, white, and blue.

"It brings happiness to everybody," Vivian said.

Patriotism and personal connections dominated the day, but this parade passed right by the spot where a gunman shot and killed Nick Kauls almost two weeks ago.

Organizers collected donations for the Gofundme account and some of the proceeds from a Kona Ice truck went there too.

A cool start to the day, and a star and stripes celebration to warm the heart.

"I'd say the good thing about this, besides supporting the family of the young man we lost, is just showing us what's really good about our country now," said a Fresno woman named Dawn.

"It reminds me of my childhood growing up in Lexington, Massachusetts," said Chris Eacock, of Fresno.

"With the celebration of the American Revolution and the birthplace of American liberty and seeing all ages and all shapes and sizes coming out and enjoying each other and enjoying America."

Organizers collected about $500 for the Gofundme account, which is now up above $82,000.