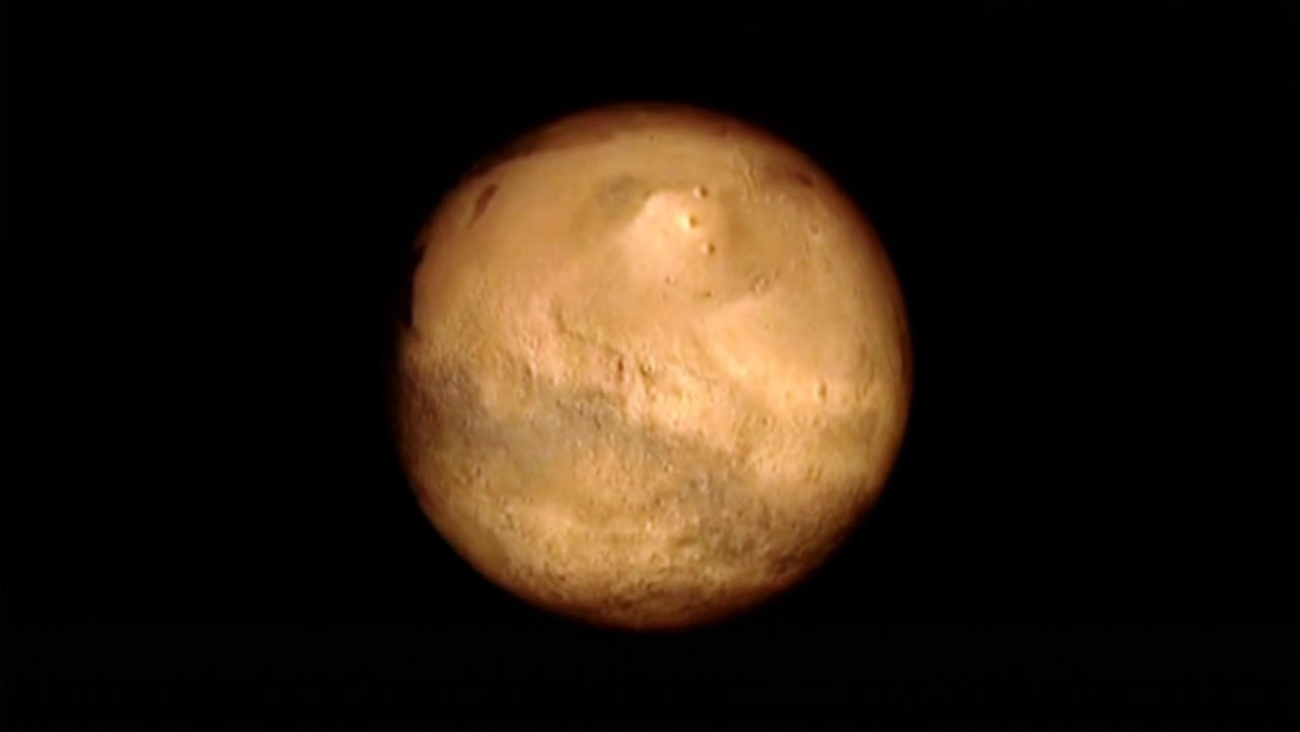 This image made available by NASA shows the planet Mars. (NASA)

AP
NEW YORK -- A huge lake of salty water appears to be buried deep in Mars, raising the possibility of finding life on the red planet.

The discovery, based on observations by a European spacecraft, generated excitement from experts. Water is essential to life as we know it, and scientists have long sought to prove that the liquid is present on Mars.

"If these researchers are right, this is the first time we've found evidence of a large water body on Mars," said Cassie Stuurman, a geophysicist at the University of Texas who found signs of an enormous Martian ice deposit in 2016.

Scott Hubbard, a professor of astronautics at Stanford University who served as NASA's first Mars program director in 2000, called it "tremendously exciting."

"Our mantra back then was 'follow the water.' That was the one phrase that captured everything," Hubbard said. "So this discovery, if it stands, is just thrilling because it's the culmination of that philosophy."

The study, published Wednesday in the journal Science, does not determine how deep the reservoir actually is. This means that scientists can't specify whether it's an underground pool, an aquifer-like body, or just a layer of sludge.

To find the water, Italian researchers analyzed radar signals collected over three years by the European Space Agency's Mars Express spacecraft. Their results suggest that a 12-mile-wide (20 kilometers) reservoir lies below ice about a mile (1.5 kilometers) thick in an area close to the planet's south pole.

They spent at least two years examining the data to make sure they'd detected water, not ice or another substance.

"I really have no other explanation," said astrophysicist Roberto Orosei of Italy's National Institute of Astrophysics in Bologna and lead author of the study.

Mars is very cold, but the water might have been kept from freezing by dissolved salts. It's the same as when you put salt on a road, said Kirsten Siebach, a planetary geologist at Rice University who wasn't part of the study.

"This water would be extremely cold, right at the point where it's about to freeze. And it would be salty. Those are not ideal conditions for life to form," Siebach said.

Still, she said, there are microbes on Earth that have been able to adapt to environments like that.

Orosei said, "It's tempting to think that this is the first candidate place where life could persist" on Mars.

He suspects Mars may contain other hidden bodies of water, waiting to be discovered.

Our planetary neighbor has a popular target for exploration, with rovers on its surface and other probes examining the planet from orbit. In May, NASA launched another spacecraft, the InSight Mars lander, that will dig under the surface after it reaches a flat plain just north of the Martian equator in November.
Report a correction or typo
Related topics:
sciencemarsu.s. & worldscience
Copyright © 2020 by The Associated Press. All Rights Reserved.
U.S. & WORLD