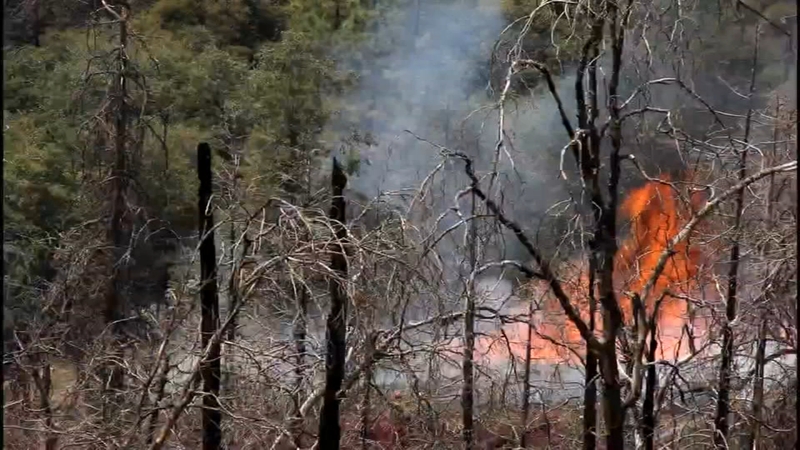 MARIPOSA COUNTY (KFSN) -- A lot of progress is being made in putting out the Ferguson Fire and tonight crews are working on increasing containment.

As this helicopter worked over the Ferguson Fire in Mariposa County.

Yosemite National Park residents waited for several hours in el portal to get the all clear to head back into the park through Highway 41 Wednesday.

This after days of being evacuated because of the blaze burning near their homes. Dakota Snider one of the hundreds waiting to return.

"We're waiting for them to clear some power poles out of the way to get back into valley lots of anxious employees getting ready to head home," said Snider.

Authorities believe significant progress is being made with the containment number getting closer to 100 percent.

This is a look into Hwy 140 into Yosemite. While residents are allowed back into the park, they’ll be dealing with a lot of clean up traffic near the entrance. Coming up at 4 and 6 , the latest on the #FergusonFire fight. @ABC30 pic.twitter.com/Cqxk5fCgc0

"We did have a jump in containment up to 68 percent," said Snider.

Cheyenne Warner tells us burning operations above the tunnel of big oak flats helped reduce the fuel in front of the main fire.

She says crews doing overnight operations like checking on the lines already put in is making a difference.

"Mopping up in so far to make sure there is no heat in those areas and that nothing will across that line," said Warner.

That prevents spot fires which we saw last week when there was a jump across Highway 41 near Badger Pass.

Something Dale Edwards hopes to not see again. He has been through this before.

"We survived the Detwiler fire last year and that was a horrific fire because it was very unpredictable and went in a whole bunch of directions at the same time. This fire is falling more of a set pattern it's burning an area that hasn't been burned since 1924 and it needs a clean out," said Edwards.

So too does the air, that is filled with thick, heavy smoke from the weeks-long inferno.