Aretha Franklin's most iconic songs: Performances that have stood the test of time

KFSN
The "Queen of Soul" Aretha Franklin has died.

Franklin, a music legend with an incredible four-octave vocal range, was known for original hits as well as iconic covers.

RELATED: A look at the life of Aretha Franklin

After her death, Google released a list of songs that people are searching for, and many of her songs started climbing the charts on iTunes.

To honor her life and legacy, take a look back at some of her songs that have stood the test of time.


"Respect" was initially released by Otis Redding in 1965 and reached #35 on Billboard's Hot 100. When Franklin released her cover in 1967, it was a massive success, spending two weeks at the top spot and becoming an anthem inextricably linked with Franklin's voice.


Franklin herself generated an often-covered classic when she was the first to release "(You Make Me Feel Like) A Natural Woman." It peaked at #8 in 1967.


In 1968, "Think" reached the #7 spot. More than a decade later, the song would appear in the film Blues Brothers, in which Franklin played Mrs. Murphy.


"I Say A Little Prayer" was not only a signature song for Dionne Warwick, who initially sang it, but also for Franklin, who released a cover less than a year later. Franklin's version only reached #10, but it remains one of her most searched-for songs today.


This classic, another song first released by the Queen of Soul herself, peaked at #2 in 1968 and to this day remains one of the songs most associated with the icon.


Let's call this song exactly what it is: timeless. Franklin's "Rock Steady" peaked at #9 in 1971 and remains one of her most searched songs today.


This soulful tune was written by Aretha's sister, Carolyn Ann Franklin. It reached #16 in 1968.


Carolyn, who would later pass away from cancer at age 43, was also a co-writer of "Angel." It only reached #20 in 1973, but after Aretha's death it was her eighth most searched song.


In 1971, Franklin released a revamped gospel version of the Simon and Garfunkel hit "Bridge Over Troubled Water." Her version peaked at #6 in 1971.


This song peaked at #9 in 1967. After her death, it regained popularity and reached #15 on the iTunes chart.

Many of the hits above also started climbing the charts on iTunes Thursday. The top five overall songs in the iTunes store were all Franklin's: "Respect," "(You Make Me Feel Like A) Natural Woman," "I Say A Little Prayer," "Chain of Fools" and "Think."

Here are a few more that were popular choices to remember that iconic voice.


One of Franklin's later hits, "Freeway of Love" peaked at #3 in 1985. This week the hit about a pink Cadillac has revved up to #7 on iTunes.

"Until You Come Back to Me (That's What I'm Gonna Do)"


Though written and later released by Stevie Wonder, this is another song most associated with Franklin's vocals. Franklin's version peaked at #3 in 1974 and has now reached #8 on the iTunes chart.

"I Knew You Waiting For Me'


If chart history is any indication, this 1987 collaboration with George Michael ties with "Respect" as her biggest hit. After her death, Billboard released a list of her 20 biggest hits, putting this song in the #1 spot.

A look at the life of Aretha Franklin
ARETHA FRANKLIN 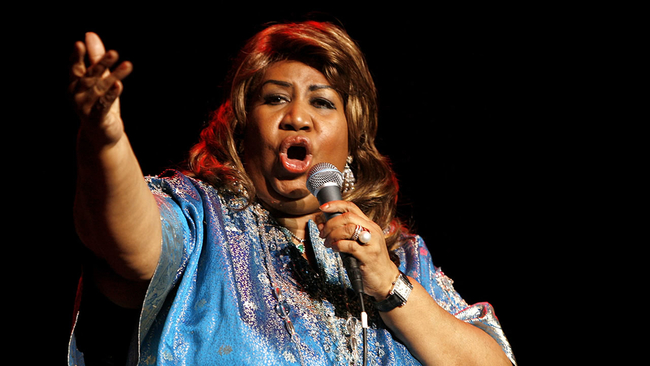 Aretha Franklin to be honored with tribute show in January