As you wish: Khris Davis gets jersey signed by Make-A-Wish kid, homers 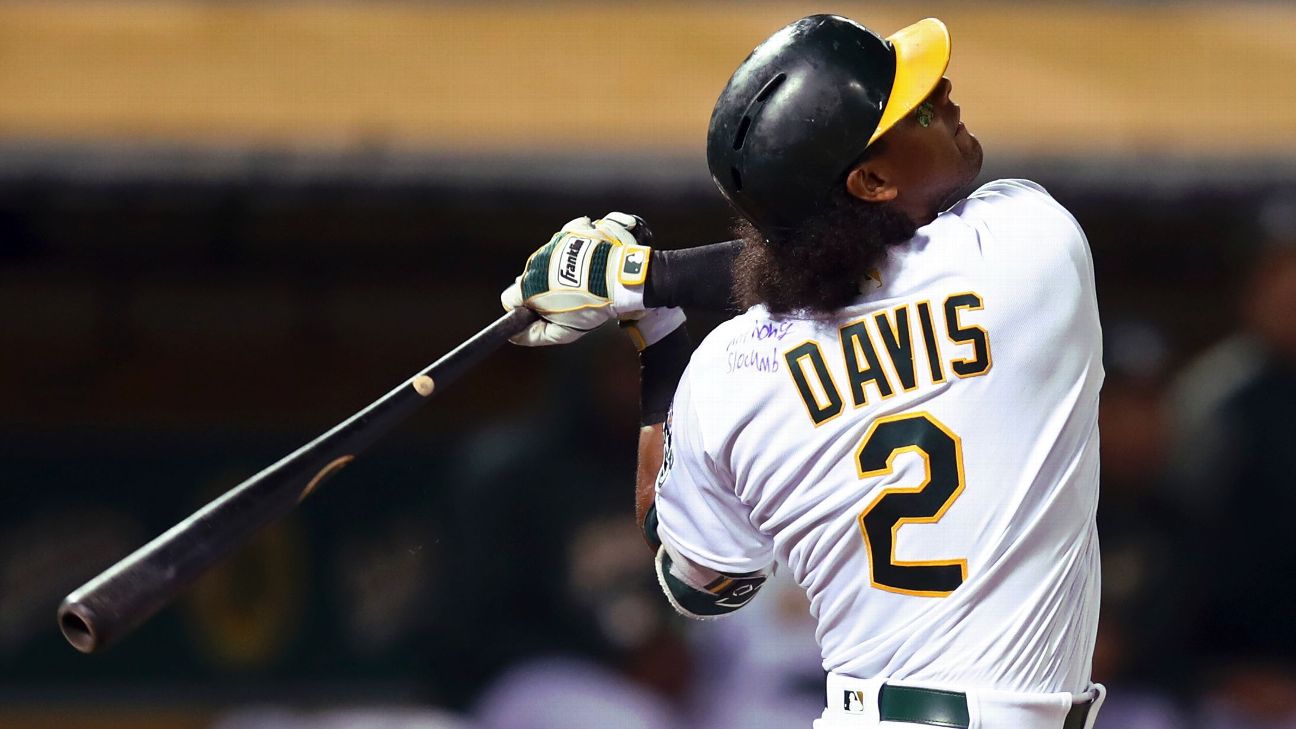 OAKLAND, Calif. -- Khris Davis asked a young fan from the Make-A-Wish Foundation to sign his jersey, then slugged a mighty home run for the Oakland Athletics in a 9-0 win against the Texas Rangers on Monday night.

Davis let 10-year-old Oakland sixth-grader Anthony Slocumb print his name in blue ink on Davis' white jersey, then wore the uniform while hitting his 37th home run in the third inning. Slocumb, in remission from a rare cancer called Langerhans cell histiocytosis, was at the Coliseum with a group from the Make-A-Wish Foundation's Greater Bay Area chapter. His mother, Natalie Sanchez, was delighted by Davis' gesture.

"I thought about him around the bases. There's not a better feeling than hitting a home run, so hopefully he got some excitement and joy from watching that," Davis said. "They're really the stars. ... He was excited. I could tell that he was just happy to be here and wanted to have some fun. It was amazing, the look on his face."

"I wanted to rock that. I wanted him to know that I was thinking about him," Davis said. "He just told me I was his favorite and he was here to watch me play."

"I was down there with the other kids and then two other players came down and then he came down," an overjoyed Slocumb said in an interview with The Associated Press outside the Coliseum. "So, I was like, 'You're my favorite player' and he was like, 'Cool.' I said, 'Can you sign my jersey?' and then he said, 'Sure, do you want to sign mine, too?' And I was like, 'Sure,' so we basically signed each other's jerseys. That's what happened."

It was well worth being out late on a school night for Slocumb. He is in his second week of sixth grade at Claremont Middle School. While he wouldn't mind if Davis gifted him the jersey, Davis thought it might be special to keep it or auction it off to help others in need.

"There was a lot of emotion with those kids' situations," Davis said. "It's the worst situation you can be in probably. I just wanted to put a smile on his face and thought maybe it would mean something if I had my jersey signed by him, so just to know what that feels like to be in my shoes for a split second. I'm just kind of at a loss for words, really."

Davis' shot was estimated at 438 feet. It came off starter Bartolo Colon and clanked off a window in the suite-level in left-center, a rare spot for home runs to reach here.

"Wow, he's awesome," said Davis' teammate, Ramon Laureano. "That's so emotional, it's so cool that he did that for that kid."

Davis is seeking a third straight 40-homer season. He hit a career-best 43 home runs in 2017, connecting on the last day of the year to best the season high he set the previous season for Oakland. The 30-year-old Davis is the only A's player aside from Jimmie Foxx from 1932-34 with consecutive 40-homer seasons.

Davis' 85 homers the past two seasons were second in the majors only to Giancarlo Stanton's 86.