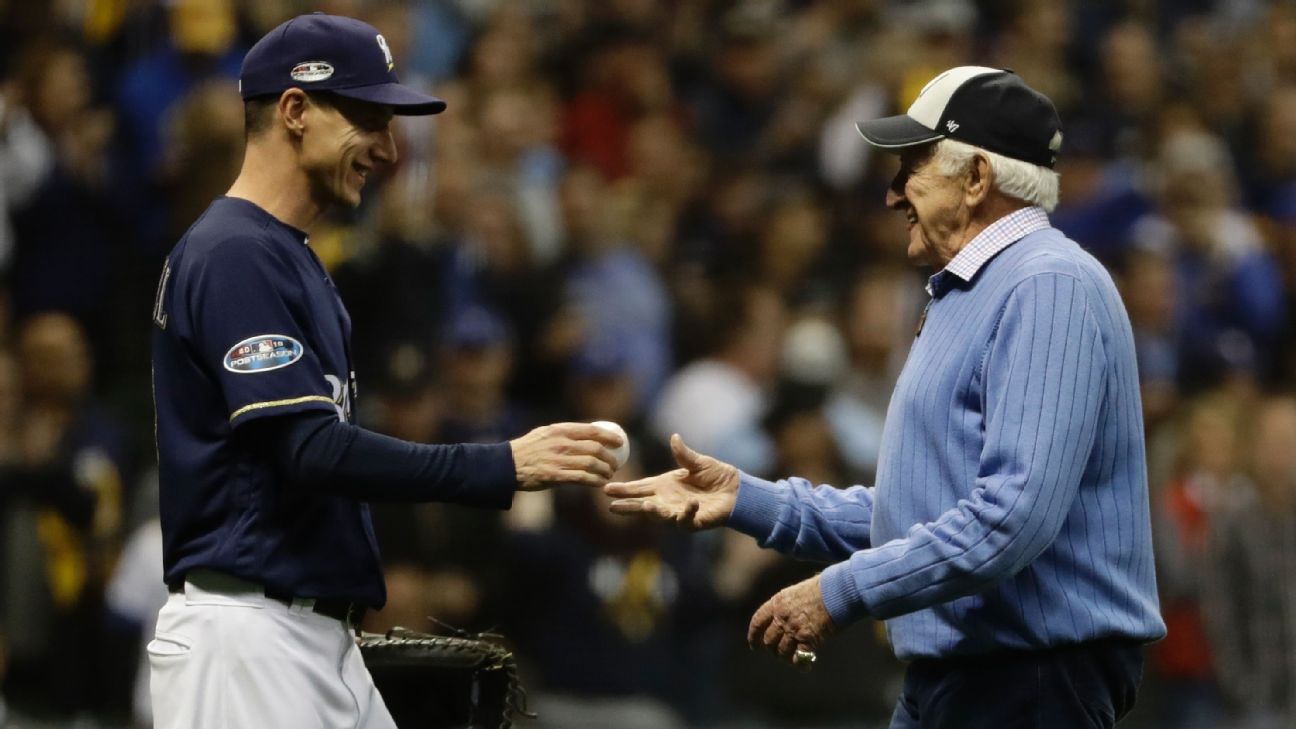 MILWAUKEE -- Back in the National League Championship Series for the first time since 2011, the Milwaukee Brewers decided to bring out the big gun, having Mr. Baseball -- Bob Uecker -- throw out the ceremonial first pitch before Friday night's Game 1.

Uecker, 83, held a pregame news conference in the Brewers' interview room that was so packed that a few people quipped that tickets should have been sold. He fielded questions for a half-hour and probably could have kept going had Los Angeles Dodgers Game 2 starter Hyun-Jin Ryu and his interpreter not arrived for their scheduled media time.

It turned into a career retrospective for Uecker.

"The Tonight Shows and doing that stuff was easy," he said. "Doing play-by-play [was hard], because I kept thinking about my friends here in Milwaukee. Guys that I grew up with, listening to the game, and here I am doing play-by-play, you know. And what they were thinking? That's what I was thinking, what they thought of me."

The beloved Uecker has been calling games for the Brewers since 1971, hired by former owner and commissioner of baseball Bud Selig. A Milwaukee native, Uecker has always returned to his hometown no matter what else has happened in his celebrated life.

Uecker is known well beyond Milwaukee. There were celebrated appearances on "The Tonight Show," when Johnny Carson ruled late-night television. Uecker's first appearance on the show came in 1969.

"[Carson] said good night to me, and Ed [McMahon] said good night," Uecker recalled. "I was walking away, I heard Johnny say to Ed, 'Did that guy really play baseball?' That's a true story. And Ed McMahon said, 'I think so.' And I went back two weeks later."

Uecker also starred in the 1980s sitcom "Mr. Belvedere," which required him to leave the Brewers for filming during the season. The television work was important enough to Uecker that he gave Selig an ultimatum.

"After the fourth time that they asked me to do ['The Tonight Show'], I went and talked to Bud," Uecker said. "I told them that if the Brewers didn't let me do that or want me to do it, then I would go someplace else. And the same thing with 'Mr. Belvedere,' because I had to leave here two weeks before the end of the season to go out and get a couple of shows."

The announcer, in his "Mr. Baseball" persona, starred in a string of Miller Lite commercials in the 1970s and '80s, which added the signature punchline "I must be in the front row!" to his arsenal. In 2014, the Brewers added the "Uecker Seats" to the upper reaches of Miller Park -- a statue of Uecker sitting in the back row, behind a metal pillar. It costs a dollar to sit in the seat for a photo, which goes to charity.

Cinema fans remember Uecker as well. He played a version of himself as Harry Doyle, the fictional Cleveland Indians play-by-play announcer in the "Major League" film trilogy, most of which he enjoyed.

"The third one stunk," Uecker said. "It was really bad. I could have played in that one."

When the real-life Indians advanced to the World Series in 2016, an internet campaign took off for Uecker, as Doyle, to call part of a game in character. But for the man who made a career of making fun of himself, that was a line he wouldn't cross.

Before any of this. Uecker was a backup catcher for the Braves and Cardinals in the 1960s, batting .200 over six big league seasons. His struggles became fodder for the self-deprecating one-liners that he became known for. But he did hit 14 big league homers, including one off of Dodgers Hall of Famer Sandy Koufax.

"I did hit a home run against him in Dodger Stadium," Uecker said. "Since then, every time I see him -- I don't know if he's traveling with the club now or not -- but every time I see him, I always apologize because I thought it was going to keep him out of the Hall of Fame."

Uecker has enjoyed a minor resurgence of his celebrity in recent weeks as the Brewers' accomplishments mounted. Videos of him being drenched during clubhouse celebrations went viral after Milwaukee clinched the NL Central and its division series win over the Colorado Rockies.

Always a popular figure at the ballpark, Uecker enjoys an almost steady stream of visitors during games. He also makes a point to visit opposing team clubhouses, where he is invariably received with enthusiasm. He says it helps that he always stayed close to the game -- for years, he threw batting practice before Brewers games that he would later call -- and because they know he used to be a player.

He always brings with him a little advice.

"I think for the most part they know that I played, and I think that's where the relation really comes in," Uecker said. "I've been on the same side where you've got a 10-game losing streak. You gotta talk to the press. It's not sometimes the most pleasant thing, but you have to do it. And I know what that's like."

As for his legacy, Uecker said he has that all worked out.