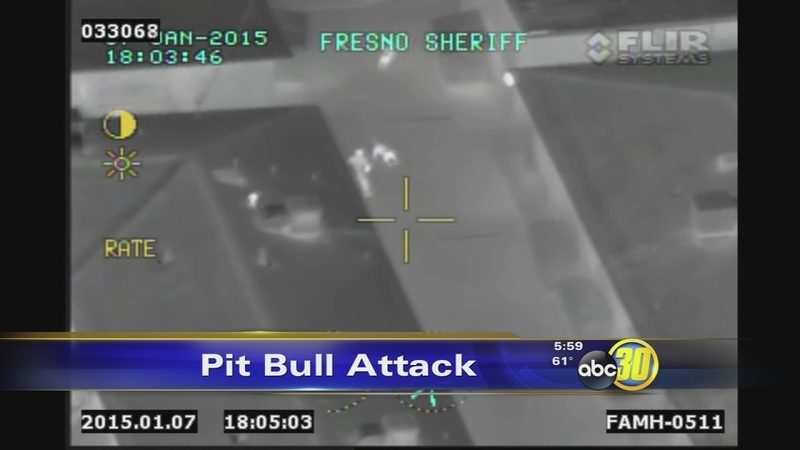 FRESNO, Calif. (KFSN) -- Night vision video shows a pack of pit bulls on the prowl in Fresno County. Those dogs are off the street, and the man they went after is alive, thanks to a helicopter high above.

That pit bull attack may have gone un-noticed were it not for a patrolling helicopter that captured the entire incident on camera.

In the video, those white dots are pit bulls running free around a Fresno County alley. And then a man appears, and almost immediately the dogs descend upon him. If it weren't for a neighbor who stepped in to help the victim may not have been able to walk away.

Four pit bulls are now behind bars -- quarantine for animals.

Anthony Flores with Liberty Animal Control said, "The animals will be here until the 10 day quarantine is completed and the administrative hold that goes into a dangerous dog."

The sheriff's deputy patrolling the skies above alerted Liberty Animal Control about the attack on the ground. They immediately impounded the animals and cited their owner. They'll now live at the shelter where they'll be observed for diseases and then a judge will decide their fate.

Neighbors say those dogs have been out before and they feel fortunate that the victim walked away with only scrapes and bruises.

After that 10 day quarantine a judge will decide whether there's enough evidence to pursue an administrative hearing. The dog's owner has been cited and will be fined.