'Start Here': USA Gymnastics, Facebook. What you need to know to start your day. 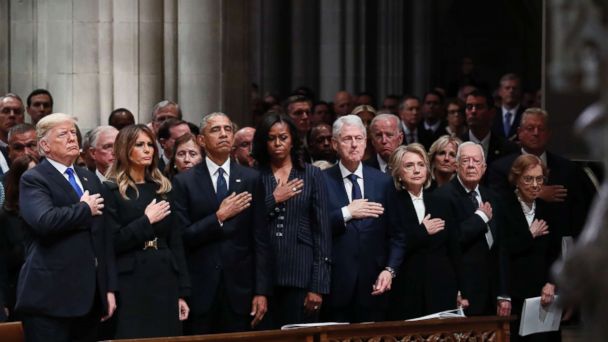 ABCNews
By DAVID RIND
It's Thursday, Dec. 6, 2018. Thanks for choosing to start here.

It was an emotional day as former President George H.W. Bush was remembered by mourners on both sides of the political aisle on Wednesday.

Former President George W. Bush delivered a moving eulogy at Washington's National Cathedral, breaking down as he described his late father as "the best father a son or daughter could have."

"[Bush] recognized that whatever he thought of 45 -- and he didn't much like him -- he was put there by the people and the Constitution, and he wanted him at his funeral," Moran tells us.

About 250 pages of documents were published online as part of British Parliament's inquiry into Facebook and Cambridge Analytica. The pages include conversations from 2012 to 2015 between senior Facebook executives, including CEO Mark Zuckerberg, discussing giving special access to certain companies including Netflix, Airbnb and Lyft.

Kurt Wagner, who covers Facebook as a senior editor of social media at Recode, breaks down what we learned from the documents: "We really saw that this data gave Facebook a lot of power, both as a potential line of business but also in a way to kind of help or hurt potential competitors depending on how big of a threat they were."

Facebook responded by saying said the documents were "cherry-picked" and "important context" had been omitted.

In a Facebook post, Zuckerberg denied the company had ever sold personal data: "Like any organization, we had a lot of internal discussion and people raised different ideas. Ultimately, we decided on a model where we continued to provide the developer platform for free and developers could choose to buy ads if they wanted. This model has worked well."

Republican state lawmakers in Wisconsin moved to weaken the powers of incoming Democratic Gov. Tony Evers and the attorney general this week during the lame-duck legislative session.

Evers said yesterday he would make a personal appeal to Republican Gov. Scott Walker to veto the bills.

ABC News' Adam Kelsey tells us: "If Walker wants to side with Republicans, he can easily sign these bills and Tony Evers' hands are tied."

Ever since Larry Nassar was convicted of multiple counts of sex abuse, USA Gymnastics has seen two CEOs resign amid the fallout over the crimes of its erstwhile employee.

Marisa Kwaitkowsky, who's covered the Nassar scandal for the Indianapolis Star, says multiple high-profile athletes have not been afraid to criticize USA Gymnastics in recent weeks for how it's handled the issue.

'I think the comments about Michael Cohen are unprecedented, inappropriate, unseemly; whether or not they're obstructive is a slightly different question': Legal experts talk to ABC News about whether tweets by the president of the United States of America constitute witness tampering or obstruction of justice.

'I didn't mean to shame you and I'm sorry for any hurt my words may have caused': Natalie Portman apologizes to Jessica Simpson after saying in a recent interview she was "confused" in 1999 when she saw a bikini-clad Simpson on a magazine cover saying "I'm a virgin" -- "Like," Portman told USA TODAY, "I don't know what this is trying to tell me as a woman, as a girl."

Accusations of debauchery, spreading immorality and seducing minors: A popular Egyptian actress is threatened with a five-year prison term for wearing a revealing dress at a film festival.

'This is terrible news': Carbon emissions on the only planet currently available to sustain human life rose the most in seven years.

From our partners at FiveThirtyEight:

What If We Already Have The Mueller Report?

George H.W. Bush, in his own words, reflects on his presidency, family: In previous ABC News interviews with Barbara Walters and Diane Sawyer, the 41st president spoke about politics and family.

For more great photos from around the world click HERE.

An Ohio dad made his 10-year-old daughter walk to school in 36-degree weather after she got suspended from riding the bus for bullying another student.

All right, you're off and running. You can always get the latest news on ABCNews.com and on the ABC News app. Details on how to subscribe to the "Start Here" podcast are below. See you tomorrow.