KFSN
By Brian Johnson
TULARE, Calif. (KFSN) -- The Visalia teacher who cut a student's hair while singing the 'Star Spangled Banner' is expected to be released from jail on Friday night -- the time is unclear. On Friday the Tulare County District Attorney's Office filed criminal charges against her.

But now 52-year-old Margaret Gieszinger could potentially face civil charges too since that student has hired a Fresno law firm to look into the case.

The Tulare County Office of Education says she will not return to her classroom, but the lawyer for this student says he still doesn't feel safe there.

Action News on Friday saw a new video that shows the aftermath of the events in the classroom that went viral. You can see most students have already run out of Margaret Gieszinger's chemistry class.

But Gieszinger continues to yell as another adult enters the room.

Attorney Mark Vogt now represents the male student who had his hair cut - a junior at University Preparatory High School.

Vogt says the boy hasn't been back to school since and hasn't decided if he will return.

"He couldn't believe what was happening. He frankly didn't know what to do, and he thought to himself, me or anybody else, she's coming for someone else. And then the video, of course, we see that later. But he was absolutely terrified," Vogt said.

Vogt has reviewed several videos of the incident and shared the new one with Action News.

He says his job is to gather as much information as possible about what happened and determine whether or not this was an isolated incident.

But based on the information he's receiving, Vogt thinks Gieszinger may have a history of erratic behavior.

He's aware of the allegation that Gieszinger melted down once before at UPHS over a missing test.

On social media, a female student claims Gieszinger once asked her if she'd ever heard a teacher use the bathroom.

"It's just some of the things we've learned from it but again I haven't had a chance to talk to all the students and al the witnesses about it and we're kind of right in the middle of that investigation now," Vogt said.

Records on a state website show Gieszinger had her credential briefly suspended in 2007 and again in 2016, but the reasons for the suspensions cannot be released.

On Friday afternoon, she faced a judge for the first time and was charged with six misdemeanors, including false imprisonment and cruelty to a child. She could spend three and a half years in jail if convicted of those charges.

Vogt says they expect to file a government claim with the Tulare County Office of Education very soon.

If the district denies that claim, then Vogt will pursue civil action, possibly against Gieszinger and the district.
Report a correction or typo
Related topics:
visaliatularefresnocrimeeducation
Copyright © 2021 KFSN-TV. All Rights Reserved.
EDUCATION Fresno nonprofit recognized as city's 'Recycler of the Year' 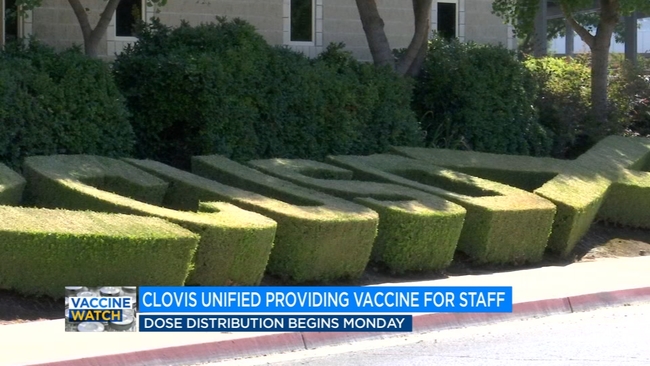