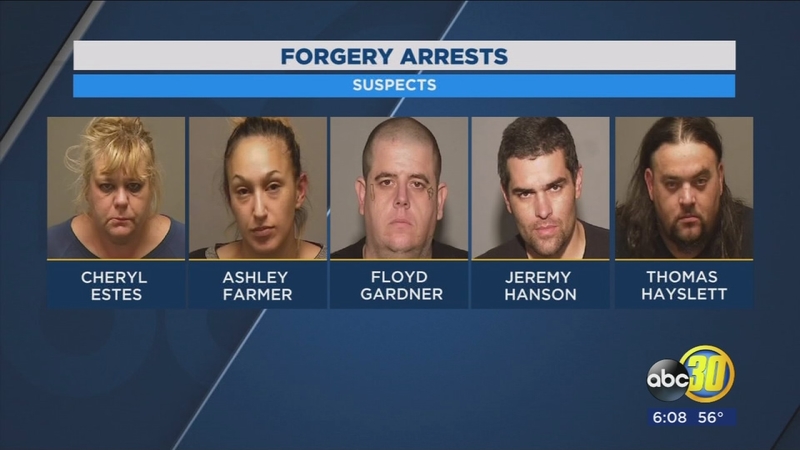 5 arrested on charges of fraud and forgery, police say

FRESNO, Calif. (KFSN) -- Five people have been arrested by the Clovis Police Department after months of investigating a forgery and fraud case.

After investigating 42-year-old Thomas Hayslett for months for fraud and forgery Clovis police received a tip he was staying at Hotel Fresno off of Blackstone Avenue.

Thursday, they served a search warrant for his room and there they found him with four other people -- along with a manufacturing setup where they were making the forged items.

Officers say they were using the hotel room to commit the crimes and were forging their own prescriptions, using them to satisfy an opioid addiction or to sell and we are able to link Hayslett to those crimes.

Captain Tom Roberts said, "They were manufacturing anything from fraudulent ID's, drivers licenses, credit cards as well as prescriptions, as well as checks."

Police officers arrested all five of them.

Officers say they are not sure how many victims have had information stolen from them but they do know they have recovered several thousand dollars of fraudulent money.

"This case is a little bit different than others, is generally we find somebody with IDs or one specific fraudulent document that they're creating or that they're manufacturing, in this instance here they were creating everything from currency to checks," Captian Roberts said.