KFSN
By Gilbert Magallon
FRESNO, Calif. (KFSN) -- A 5-year-old girl has been injured in a shooting in central Fresno.

Police say shots were fired into her family's apartment in what they believe was a targeted attack.

The shooting took place at about 6:15 p.m. at the Ashmark Arms apartment complex off Ashlan and Marks.

According to detectives, a suspect went onto the complex and fired through the door of a unit.

Inside, there was a family a five - a father, mother and their three children.

Their five-year-old daughter was struck.

HAPPENING NOW: Fresno Police continue to investigate a shooting at the Ashmark Arms apartment complex off Ashlan & Marks. A 5-year-old girl was injured and is expected to be okay. Police say a bullet or bullet fragment hit her left eye. More details on @ABC30 at 11. pic.twitter.com/FJn5pWQ3q8

Police say a bullet or bullet fragment hit the 5-year-old's left eye, but she is expected to be ok.

"They were inside not doing anything in particular when all of a sudden shots rang out and rounds started coming through their front door," said Lt. Bill Dooley.

Police say multiple rounds were fired into the home.

One witness told us they heard at least 11 gunshots and heard a vehicle take off.

Detectives believe the home was targeted, but they don't know why.

Those who live in the complex say they haven't had any shootings happen in recent history and management has been trying to keep the complex clean.

Police tell us they were able to acquire surveillance video from the complex.

They're hoping through this they'll be able to get a better look at the suspect since right now they don't have a description.
Report a correction or typo
Related topics:
fresnofresno centralchild injuredshooting
Copyright © 2021 KFSN-TV. All Rights Reserved.
CHILD INJURED

'Miracle' baby survives crash that killed 4 relatives at once 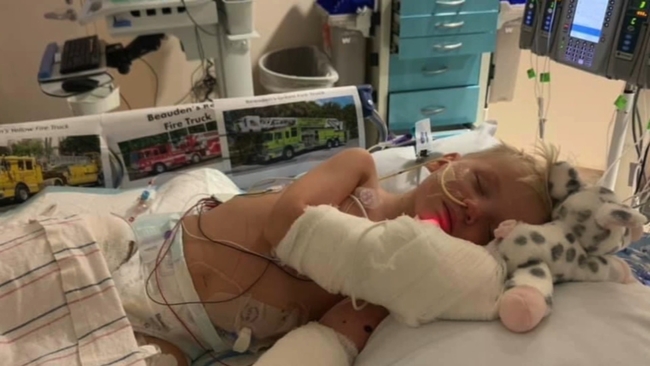