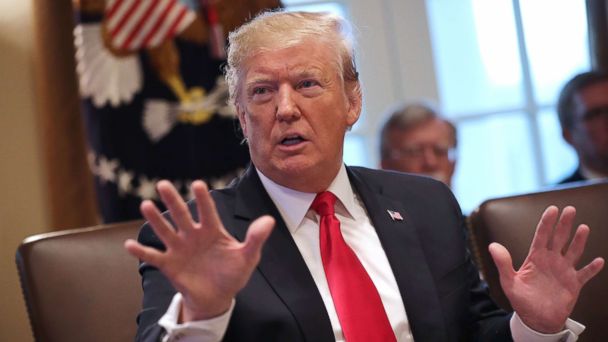 Twelve days into a partial government shutdown, President Donald Trump expressed resolve to continue the shutdown for "as long as it takes" in order to secure funding he's demanded to build a southern border.

"Could be a long time, could end quickly. It's too important a subject to walk away from," the president said, asserting that the people of the country support him.

"I think the people of this country think I'm right," Trump said.

The president also noted that he skipped his traditional Christmas vacation to Florida amid the shutdown, apparently as evidence of his commitment to the fight.

"I was here on Christmas evening, I was all by myself in the White House," Trump said. "That's a big, big house, except for all the guys out on the lawn with machine guns. I was waving to them. I never saw so many guys with machine guns in my life."

No resolution to the government shutdown or the current stalemate over border funding emerged from a bipartisan meeting Wednesday at the White House with the president and Department of Homeland Security officials. Democratic and Republican lawmakers gathered in the Situation Room for a briefing on border security - but that briefing was cut short over disagreements on border funding.

Republicans in the meeting said that the lawmakers agreed to meet on Friday to continue the conversations. But, it did not seem to be a promising start.

A White House official, who was present for the bipartisan gathering, described Pelosi interrupting Secretary Nielsen's briefing shortly after it began to make her case. Schumer said the president couldn't give a good reason to keep the government closed.

"Our question to the president and to the Republicans is, why don't you accept what you have already done to open up government, and that enables us to have 30 days to negotiate for border security?" Pelosi asked. "Democrats have been committed to protecting our borders. It's the oath of office we take to protect and defend. It has been very important to us, and we have committed resources to it."

Schumer said he challenged the president to give one reason why he would continue the shutdown. "He could not give a good answer," Schumer said. "So we would hope that they would reconsider and would support the very bills that pass the Senate."

"The only reason that they are shutting down the government is very simple. They want to try and leverage that shutdown into their proposals on border security," Schumer said.

Earlier at a cabinet meeting, President Trump argued for the efficacy of a physical wall, pointing to the Vatican and Israel as cases where physical walls have succeeded.

"The wheel, the wall, some things never get old," the president said and accused Democrats of playing politics and looking ahead to 2020 in the fight, ahead of a scheduled meeting with Congressional leaders at the White House later in the day.

"We are in a shutdown because Democrats refuse to fund border security," Trump said.

Democrats have presented two plans to reopen the government, but neither deal includes the president's demand for $5 billion in funding for the border wall. Democrats have offered $1.3 billion in border security.

Reporters were allowed in for more than an hour and a half of a rambling cabinet meeting that was riddled with factually inaccurate statements from the president and covered a wide range of topics, including incoming Utah Sen. Mitt Romney's critical op-ed, Syria, and Kanye West.

Echoing a tweet he sent earlier in the day in reaction to Romney's scathing Op-Ed, the president said he was surprised the former Republican presidential nominee published the piece.

"I wish Mitt could be more of a team player. I'm surprised he did it this quickly," Trump said. I gave him an endorsement. I was happy he won."

The president said that if Romney had fought as hard against Obama as he did him, "he would have won the election" and expressed hope that Romney will come around to supporting him.

The president reiterated his commitment to pull troops out of Syria "in a short period of time" but also qualified that there's "no timetable."

The president also claimed that he essentially "fired" former Defense Secretary Jim Mattis, which contradicts a vast body of reporting that Mattis resigned because of policy disagreements with the president, specifically over his order to withdraw troops from Syria.

"We had a little glitch in the stock market last month," he said and predicted that the market will soar when trade deals are complete.
Report a correction or typo
Related topics:
abc newsnational
Copyright © 2021 ABC News Internet Ventures.
More Videos
From CNN Newsource affiliates
TOP STORIES