Kraska, a sports director at the CBS affiliate station in San Diego and a former Los Angeles TV anchor, was shot and wounded outside his Scripps Ranch home on Tuesday.

Police were searching for a suspect, identified as 54-year-old Mike Montana, a white male, 6 feet 3 inches tall, driving a white minivan with "Superior Painting" written on it. He is wanted for attempted murder and is considered armed and dangerous. 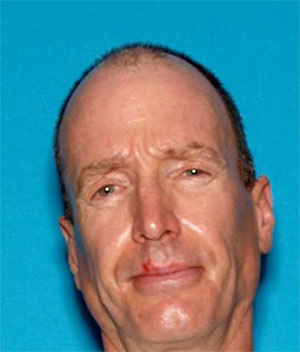 Mike Montana, 54, is seen in a photo from the San Diego Police Department.

The home where Montana is reported to rent a room is located on Noden Street near Prescott Avenue. Officers believe he may be in a back house behind the main home.

A white van, which matches the description of Montana's car, was seen parked in the driveway of the home. He surrendered to police at about 10 p.m.

The gunfire at Kraska's home was reported in the 12000 block of Avonette Court shortly after 3 p.m., SDPD public-affairs Officer Matt Tortorella said.

A neighbor told police that someone shot the rear window out of Kraska's silver Mercedes-Benz, firing as many as 10 shots, then fled in an older-model white minivan.

Kraska was shot several times in his car. KFMB says Kraska was alert, awake and responsive when being taken to the hospital, where he was undergoing surgery.

In the 1990s, Kraska briefly anchored for KCBS-TV in Los Angeles and worked on the show "Hard Copy." But he's been a fixture at Channel 8 in San Diego since 1999. He's well known for his big personality and for his years of work covering the San Diego Chargers.

Scripps Ranch is an affluent suburb of San Diego with a very low crime rate.